India   All India  28 Jan 2020  U2 show example of how concert management in India has evolved
India, All India

That micro and macro managing of concerts will only rely heavier on smart digital methods as time goes on, is a given. 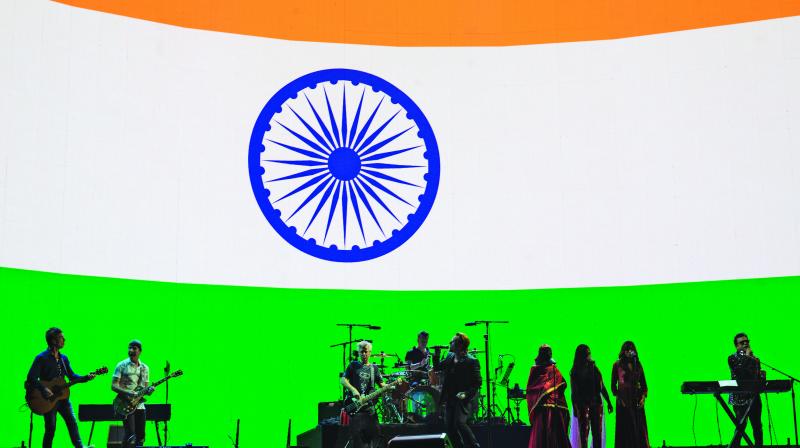 The Indian flag at the U2 Joshua Tree Tour (Photo: Ross Stewart)

As I write this, it has been a bit over a month since the globally popular band U2’s performance in Mumbai. By the time you read it, it could be more. For 70-year-old Uncle B, a Delhi-based mathematics professor, who prefers the alias to his rather cute Bengali name, 37 years had passed since he last attended a stadium-scale international concert in India. Hence, the decision to buy a `12,000 ticket and fly to Mumbai via Pune was fuelled by “my love for the Joshua Tree album that I listened to through the 1990s and the fact that they were ending their iconic 32-year world tour on Indian ground”. Most of the approximately 30,000 to 40,000 attendees had similar reasons. Only, a lot of them were half his age and had spent at least half their lives growing with the Internet revolution. But buying tickets online as opposed to “going to a stadium counter or a designated retail outlet to buy them”, having those tickets delivered to a change of address a week before the concert and navigating the “digital” landscape of the concert across email exchanges, keeping updated with notifications about logistics and arrangements, was no problem for him. Neither was the organiser’s decision to go “cashless” and use top-up cards that could only be loaded with cash online (something that caused much frustration for many thanks to the “dark” side of technology), as he skipped the process altogether “simply choosing not to purchase any food and beverage and enjoy the audio-visual extravaganza over a few sips of water from time to time”.

That micro and macro managing of concerts will only rely heavier on smart digital methods as time goes on, is a given. But when an aggregator like “BookMyShow” from the online/digital world that started out as an online and mobile-app based ticketing platform for movies, musters up the confidence to pull off bringing a band of U2’s scale to India and handling all aspects of organisation (barring production, which was done by US-based “Live Nation Entertainment” — one of the world’s leading live entertainment companies), one can’t help but question whether companies like DNA Networks, Oranjuice Entertainment, Wizcraft and other promoters that were household names associated with many stadium-scale international acts, have passed the baton on to digitally savvy platforms of the day.

“Most of the sponsors we worked with when we brought down some of the biggest global bands and artistes to India, wanted to move on to sponsoring events that are long term, as opposed to one-off concerts. That is why we have moved onto managing some major sporting leagues in the country today, which have been running successfully for quite a few years and have put our energy there (like the Indian Super League, the Indian Premier League, the Pro-Kabaddi League). Plus, the sponsors also get television eyeballs with live sport, which was not there in the concert deals”, clarifies Venkat Vardhan, founder and chairman of DNA Networks that became a part of concert DNA in India ever since they brought down the famous Greek violinist “Yanni” for a show against the backdrop of the Taj Mahal in 1997. Since then, Dire Straits, Aerosmith, Shakira, Beyonce, Roger Waters, Santana, Bryan Adams and Iron Maiden have all shaken (or high-fived) Venkat’s palm on their arrival in India for single or multi-city tours organised by him. “There is a slowdown of sorts happening in Asia when it comes to ticket prices for big artistes. Bands are getting much better and higher ticket prices all over the world except for Asia. Which is why the Asia leg has been a loss for many promoters because of the high costs involved and the math doesn’t add up”, he justifies, stating that he worked on a “60-40” revenue model where 60 per cent of the earnings on international concerts came in through sponsorships and the remaining 40 rested on ticket sales. Farhad Wadia, another old hat from the “scene” and former head of Events-18, who I traced down to Texas, USA, where he’s been living the last five years, echoes a similar tune and adds that “once corporates started putting money into concerts and dictating terms, it was not the same. A lot of big-name concerts actually did not make money and ran promoters into losses.” He claims he had been in touch with the U2 management on a few occasions over the years, but an India tour never materialised “because of the economics”. Now a “retail consultant”, he wonders how BookMyShow managed it. “Their deep pockets and massive funding back-up” could be a part of the answer. But the fact that they went out on a limb till the very last minute to sell every ticket possible (and yet not achieving full stadium capacity) is still questionable.

In fairness, to profit from a concert for an organiser is a gamble that remains and will probably continue to remain one, no matter which decade. Where the concertgoer has profited in present times becomes apparent in the availability of “handholding” at every stage. Tickets can be purchased online and delivered anywhere. Each and every little update about the concert one is attending is posted on social media platforms and emailed. With a massive growth in population since Yanni stroked his violin here in the 1990s, smart alternatives to avoid parking hassles and reach the venue are readily available like shuttle buses, shared cabs, designated local trains and even helicopters. Cards and virtual wallets replace cash for food and beverage. But above all, an evolved customer care team has come about that may not be able to undo unforeseen snags, but do their best in swiftly gratifying passionate fans, who have only too many outlets to vent out and damage the organiser’s reputation on today than ever before — should they feel cheated or cut short in any way. “We have invested a great deal of time, training and money in getting together a customer services force pan-India that is well versed in handling sensitive situations with customers. They add a more human touch as opposed to the robotic and emotionless tone that one naturally associates with customer care calls in India. We are trying to achieve a stage where a customer’s problem can be solved in one single call without having to first note the issue and then call back with a solution”, Albert Almeida, COO, Live Entertainment, BookMyShow, tells me, when I commend some recent interactions with his “force”. “Over the years we have built up a user base across a large number of communities like theatre, sport, music and various events. In this day and age, by and large everyone is comfortable with using our end-to-end services on the mobile. That, along with the fact that we felt if we become promoters of large-scale events and concerts ourselves, we can control the complete experience.”

A line-up of international acts across comedy and music are lined up for the year ahead, that contradict the apprehension felt by industry veterans who have burnt their fingers. The stories of promoters having only newspaper space and advertisement hoardings to announce concerts on, having to physically take song books with lyrics of the set-list to the Censor Board for clearance, will now just be anecdotes. Convenience in every aspect is the way forward. Albert did drop a hint that someone “really big” has India on their calendar. I wish it were Michael Jackson again. But even if he was resurrected, the conversation would not start over a fax machine like it did between his team and the Indian organisers for his Mumbai performance in 1996!

The writer is a Web and TV producer, presenter and writer who tracks trends