And the paintings will travel to various galleries around the country 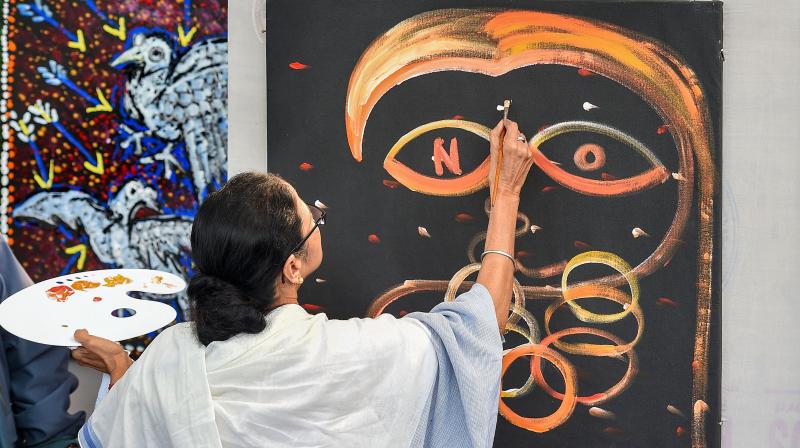 West Bengal chief minister Mamata Banerjee paints during a protest against the Citizenship Amendment Act (CAA) and the National Register of Citizens (NRC) at an art camp in Kolkata, Tuesday, Jan. 28, 2020. (PTI Photo)

KOLKATA: West Bengal chief minister Mamata Banerjee, along with other artists, took up the brush on Tuesday and created paintings to express dissent against the amended Citizenship Act and the proposed NRC exercise.

The chief minister urged people to carry out peaceful protests against the new citizenship law and reiterated that she would never allow its implementation in the state.

The programme, themed around anti-CAA agitation, was organized near the Mahatma Gandhi statue on Mayo Road, where Banerjee, who is also the Trinamool Congress supremo, voiced her protest through her paintings.

According to a TMC leader, the paintings will be exhibited in various galleries of the country.

"These paintings will be a part of our awareness campaign against CAA and NRC," he said.

The issue of CAA has emerged as major political flashpoint in West Bengal with the TMC opposing the contentious legislation tooth and nail, and the BJP pressing for its implementation.

Banerjee, a staunch critic of the BJP, has been at the forefront of anti-CAA protests.

The TMC supremo has so far led 11 protest marches and seven rallies in various parts of the state against the CAA and the NRC.