No Indian student found to be affected by this virus. Parents need not worry: foreign minister Jaishankar 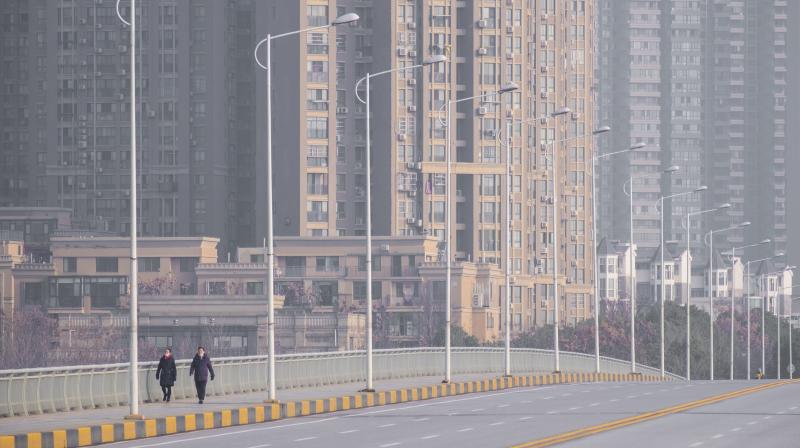 People wearing face masks walk down a deserted street in Wuhan in central China's Hubei Province, Tuesday, Jan. 28, 2020. China's death toll from a new viral disease that is causing mounting global concern rose by 25 to at least 106 on Tuesday. (AP)

AHMEDABAD/VADODARA/NEW DELHI: External affairs minister S Jaishankar on Tuesday said the central government is planning to send a plane to Wuhan in China to evacuate Indians stuck due to the coronavirus (nCoV ) outbreak there.

He also said no student from India has been found to be affected by the virus till date.

"The Indian embassy is in constant touch with the Chinese government. To evacuate students and other Indians from Wuhan, we are planning to send a plane there. Our efforts are on to bring them back. It will take some days. I urge people to trust the government on this," Jaishankar told reporters on his arrival at the Vadodara airport.

"No Indian student has been found to be affected by this virus. Parents need not worry about their children," he said.

The spokesman of the Ministry of External Affairs (MEA) Raveesh Kumar tweeted, "Our @EOIBeijing is working out the logistics & is in touch with the Chinese govt. authorities & our nationals on this matter. We will continue to share updates."

Sources told PTI that flag carrier Air India has kept one of its 423-seater jumbo planes ready in Mumbai for the evacuation of Indian citizens from Wuhan in China.

They said the airline is awaiting necessary approvals from the ministries of external affairs and health to operate the special flight. The health ministry's nod is required because the operating crew has to fly to a virus outbreak territory.

Some 250 Indians, mostly students, are to be evacuated from Wuhan.

At a meeting of top secretaries called by the cabinet secretary on Monday, the government decided to be prepared for possible evacuation of Indian nationals in Wuhan.

Accordingly, Ministry of External Affairs will make a request to the Chinese authorities for evacuation of Indian nationals, mostly students, stuck in Wuhan city. The Ministry of Civil Aviation and Ministry of Health will make arrangements for transport and quarantine facilities respectively, an official release said on Monday.

Thousands of people from several nationalities are trapped in Wuhan and the surrounding provinces, which are under lockdown to stop the spread of the contagion.

"The virus is scary, but the biggest fear for me is that this thing will go on for months, and it will get harder and harder to get supplies, and to live."