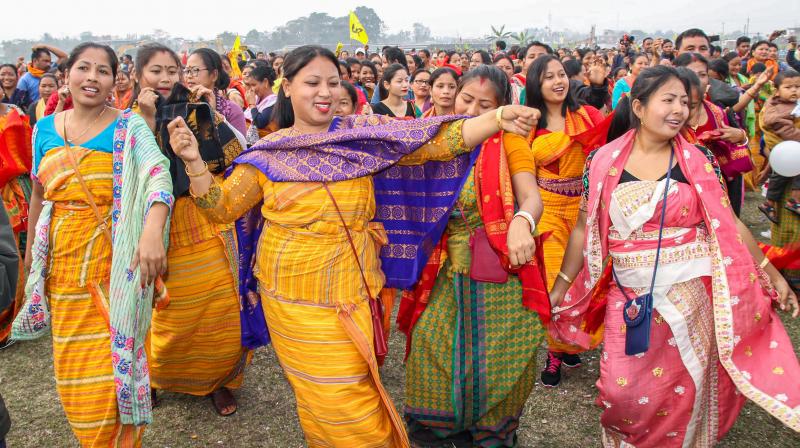 Women of the Bodo community dance during a welcome ceremony for their leaders who returned home after signing the Bodo Peace Accord 2020 between the National Democratic Front of Bodoland, the Assam government and the Central government in Delhi on Monday. (PTI Photo)

GUWAHATI:  A day after the Union government signed an accord with Bodo militant groups, Assam finance minister Himanta Biswa Sarma on Tuesday talked it up as “historic” and a great template for similar deals with militant groups in Assam an Manipur.

He also went a step further held out an olive branch in particular to Paresh Baruah’s anti-talks faction of the Ulfa-I. New Delhi is now willing to negotiate with it to bring “permanent peace” in the Northeast. Sarma said Union home minister Amit Shah too had much the same thing on Monday.

“This is the first time that this government is making a public appeal to Ulfa (I) for a dialogue. If they are willing, the Centre will reciprocate," he said.

To Baruah, the top insurgent leader in the region, Sarma held out the example of the "historic accord" signed on Monday with all factions of the National Democratic Front of Bodoland (NDFB) in presence of all the stakeholders.

"In this context, I would like to request Paresh Barua and his anti-talks faction to consider engaging in a productive dialogue. The Centre and the state government want peace in the region," he said.

Sarma said the pro-talks faction of Ulfa led by Arabinda Rajkhowa was already engaged in a dialogue with the Centre but for peace to have a chance in the entire region, it was necessary that all factions came to the negotiating table.

Sarma, convenor of the North East Democratic Alliance (NEDA), extended the peace offer to militant outfits in Manipur as well. He claimed that peace has dawned on states in the Northeast such as Arunachal Pradesh and Nagaland; only Assam and Manipur were still restive.   So, “if militant outfits in Manipur and Assam come forward for talks, it will help establishing lasting peace in the region.”

The Assam government is planning a celebration of the Bodo accord in Kokrajhar on February 7 to which it has Narendra Modi and Amit Shah. Announcements on constitutional safeguards for the indigenous people of Assam will be made during the forthcoming Rongali Bihu celebrations.

Bodo leaders who returned to Guwahati after signing the accord in New Delhi were given a grand felicitation by civil society groups in Chirang district on Tuesday. All signatories to the deal, including Pramod Boro, president of the All Bodo Students Union, were there.