India   All India  28 Jan 2019  Education is an asset we cannot afford to neglect in India
India, All India

Education is an asset we cannot afford to neglect in India 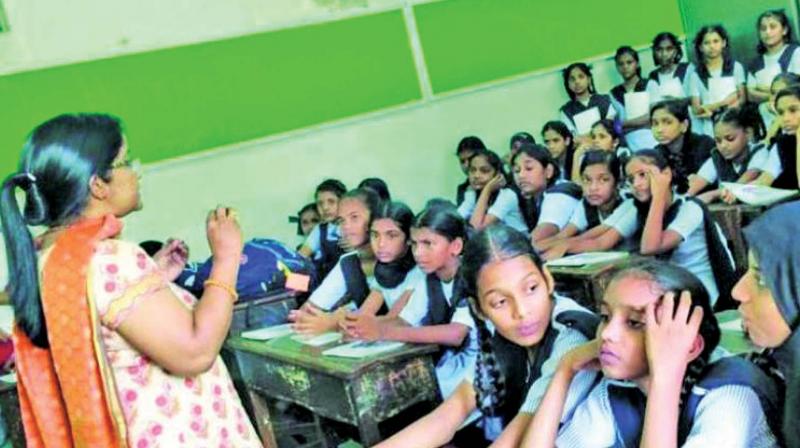 More Indian children are in school today than ever before, but the quality of public schools has sunk to abysmally low levels, as government schools have become the reserve of children at the very bottom of India’s social ladder.

An investment in knowledge pays the best interest
— Benjamin Franklin

The building blocks of a nation are the citizens of its tomorrow. The way these seeds will sprout will always depend on the way you choose to water them. India’s education sector is one of the largest sunrise sectors in the economic and social development of the country. India’s education sector has expanded rapidly in the last decade but the quality of learning remains pathetic on account of unimaginative and misguided policies. In an increasingly knowledge-based global economy, quality education is more important than ever.

Education has the potential to become a powerful catalyst for development, serving as a bridge from poverty to prosperity, from division to understanding, from exclusion to participation. But for education to achieve these objectives, it must inspire and develop children to think creatively, reason systematically and release their potential to shape their own future. Education can be truly transformative if it is holistic, ambitious, and inspirational in its approach .Yet even after more than seven decades of independence, India is facing a major education crisis.

Literacy is officially defined as the capability of “a person aged seven and above who can both read and write with understanding in any language” — is admittedly an inadequate measure of human capability in a modern economy. Based on this minimal definition, India’s literacy rate according to the 2011 Census was 72 per cent, well below the global average of 86 per cent. This has improved only slightly since then.

The latest Annual Status of Education Report (ASER 2018) survey — the most authentic barometer of India’s educational health — shows that its findings are not inspiring, and in some cases quite dismal. The fragile foundation of basic education augurs a dim horizon for India’s future human capital. The students are not able to learn the basics of reading, writing, and arithmetic and do not meet even elementary mathematics standards.

While enrolment has improved sharply since 2006 for both boys and girls, not only at the primary but also in the 11-14 age group, literacy and numeracy skills remain dismally below par. The ASER survey covered 5.46 lakh children in the age group 3-16 across 596 districts. What is alarming is the decline in reading and arithmetical abilities at the Class VIII level since 2012, with government schools faring worse than private ones: more than a quarter of all children at this level cannot read a Class II text, while over half of all children cannot do division (three digits by a single digit number). Seen along last year’s ASER survey on learning abilities of the 14-18 age group, those about to enter the workforce, it would seem that India’s “demographic dividend” is turning into a sour joke.

These figures are a serious concern in a country where only 74 per cent of its 1.2 billion inhabitants are literate, making India home to the largest illiterate population in the world. We all know that a sound and productive education system needs to focus on science, math, engineering and technology — the skills today’s employers are looking for to fill jobs right now and in the future.” Inefficient teaching methods, such as rote learning, which focuses on memorisation as opposed to critical reasoning, are still widespread at the primary and secondary school levels. The rote teaching methodology has demonstrated shortcomings. Studies by the Programme for International Students Assessment, an OECD initiative, and Wipro found that students at the primary and secondary school level have fallen back in math, science and reading literacy in recent years.

The call for higher investments in education have been made since independence. The famous “Bombay Plan” (authored by country’s foremost experts and published in 1944 as “A Plan of Economic Development for India”, proposed public investment in literacy, including adult literacy, and school and college education, including “scientific education and research”. It said that “extreme forms of poverty will prevail… as long as the overwhelming majority of the Indian people are able neither to read or write.” The document’s arguments in favour of public investment in education and human capability building have been made more vigorously by modern economists like Amartya Sen.

The skewed priorities of the government in this vital sector manifest in low learning levels. The United Nation’s Sustainable Development Goals include a commitment to ensure inclusive and equitable quality education and promote lifelong learning opportunities for all. While we are on the right course, our obsession with universal coverage of education has compromised the quality of learning. It is time that India moves beyond a singular focus on enrolment numbers and grapples with the problem of poor quality.

The usually parroted reasons for the poor standard of education are teacher absenteeism, poor student attendance, bad infrastructure, inadequate teacher preparation programmes, and rote learning practices. The most common refrain is: “The ones who understand education are not empowered while the ones empowered have no idea about education.” While these issues are valid, they do not fully explain the learning crisis apparent in our classrooms.

More Indian children are in school today than ever before, but the quality of public schools has sunk to abysmally low levels, as government schools have become the reserve of children at the very bottom of India’s social ladder. The Right To Education Act has been quite successful in achieving three broad objectives: higher enrolment, lower dropout and completion of mandatory basic education.

The bane of the modern examination system is its regressive testing regimen which we stubbornly refuse to reform. Exams are no longer a metric for the test of learning or intelligence. Instead, they have degenerated into an awfully pernicious ritual designed to produce compliant drones who can regurgitate facts faithfully. What we test is the acquisition of a narrow collection of facts, not whether children have the skills for fruitful employment or the ingredients for gainful adulthood. Children are being coaxed into learning merely to pass tests. Schools are not fostering love for learning. Moreover, they do not inculcate the all-round skills they need when they leave the portals of learning to the world of competition outside. Real education is more about wide reading, deep thinking and asking hard questions rather than simply reproducing crammed answers faithfully. Formal teaching needs to be supplemented by in-school pull-out programmes, after-school tutoring, and summer camps supervised by NGOs with emphasis on non-conventional innovative pedagogies.

Education needs more champions than health and environmental advocates because it is one rising tide that can lift all the boats. Since education has more room for innovation than any other development sector, there is a unique opportunity for social entrepreneurs. We need to transform curriculum and teaching practices to focus less on rote learning or straightforward calculation and more on relevant skills, like communication, reasoning ability, problem-solving and reasoning ability, and critical and independent thinking. We are under an illusion that our children are digitally savvy but more often their knowledge is only screen-deep. If young people are to be empowered citizens, they will need to understand how technology affects every aspect of our life. Greater tech literacy will be essential to ensure that the human implications of the ongoing fourth Industrial Revolution are positive.

If India is to truly rise as a global economic power, the policymakers and education specialists must focus their efforts on developing its public schools into a world-class education system. Catchy announcements like “blackboard to digital boards” will have relevance only when we translate rhetoric into commitment and into genuine action. Goals without actionable strategies are just good intentions. The proof should come by first addressing the fundamental concerns of public education. Nelson Mandela famously said: “Education is the most powerful weapon which you can use to change the world.”

Adequate resources, higher standards for teachers and the flushing out of corruption must all be part of a reform package that seeks to make Indian education the nation’s top priority. Improving education outcomes demands a relentless focus on quality, equity and results.

The writer is Member, Niti Aayog’s National Committee on Financial Literacy and Inclusion for Women