The ruling party pointed out that the BJP leaders were treated similarly during the Congress rule but it had never made it an issue. 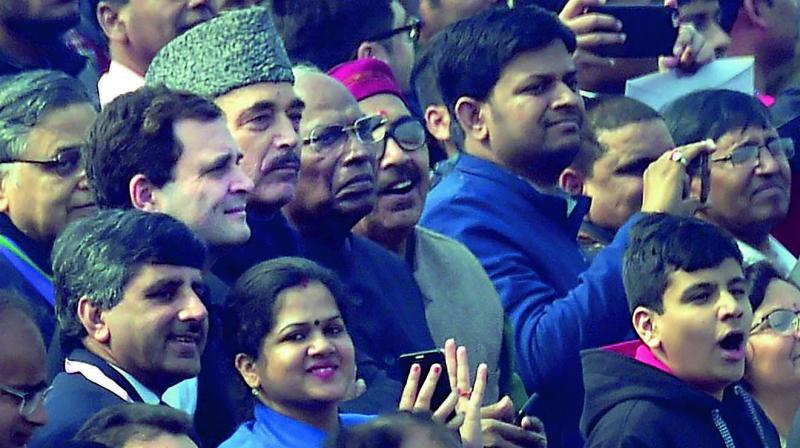 New Delhi: The BJP on Saturday rebuffed the Congress’ objections to its president Rahul Gandhi being given the sixth row seat at the Republic Day function, saying he considered himself a “super VVIP who should be put ahead of everyone else”. The ruling party pointed out that the BJP leaders were treated similarly during the Congress rule but it had never made it an issue.

BJP national spokesperson G V L Narasimha Rao today rejected the Congress’ criticism, saying it did not behove the party, which “claims to have a 133-year-old illustrious history”. The ruling party wondered what the fuss was about when Rahul had been allotted a seat as per “protocol”.

The Congress president took the designated seat in the sixth row on Friday during the Republic Day parade here, prompting an angry reaction from his party that accused the government of setting aside tradition and indulging in “cheap politics”. The same treatment was meted out to the BJP national presidents and leaders like Rajnath Singh when the Congress was in power, Mr Rao said. “We never made it an issue. We function in a spirit of democracy, whereas you claim to have 133-year-old illustrious history,” he said. “People of new India do not expect their political leaders to wear their VVIP cards on their shoulders. Rahul is trying to tell he is a super VVIP and should be put ahead of everyone else even if he doesn’t have any position or does not fall in the protocol list,” Rao said.