2 youth were killed and 9 other civilians injured in the Army firing on a stone-pelting mob in J&K's Shopian. 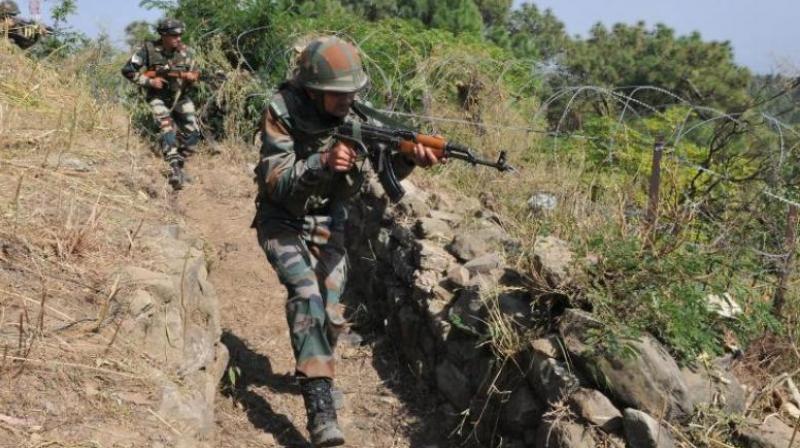 The Army claimed that its men had opened fire 'in self-defence' and that only after a 250-strong mob tried to lynch a Junior Commissioned Office (JCO) and snatch his service weapon. (Photo: PTI/Representational)

Srinagar: The Jammu and Kashmir police on Sunday booked an Army major and his associates on charges of murder, attempt to murder and endangering life in Saturday’s shooting incident in a remote village of southern Shopian district.

Two youth were killed and nine other civilians injured in the Army firing on a stone-pelting mob in Shopian’s Ganowpora village on Saturday afternoon.

The incident has evoked anger throughout the Kashmir Valley where a shutdown was observed on Sunday to mourn and protest the killings. The call for one-day strike was issued by ‘Joint Resistance Leadership’, an alliance of key separatist leaders, which accused the Army of indulging in “genocide” of the Kashmiri youth.

The Army claimed that its men had opened fire “in self-defence” and that only after a 250-strong mob tried to lynch a Junior Commissioned Office (JCO) and snatch his service weapon. It also said that seven soldiers were injured and eleven vehicles suffered damage in the mob attack.

The State government has ordered a magisterial inquiry into the firing incident.

J&K police which had registered an FIR No. 26/2018 over the shooting incident at a police station in Shopian on Saturday itself has after preliminary investigation invoked Ranbir Penal Code’s Section 302 (murder), 307 (attempt to murder) and 336 (endangering life) against Major Aditya of the Army’s 10 Garhwal.

The Army convoy which came under attack by stone-pelting youth in Ganowpora village at 3 pm on Saturday was on its way to Maspora from 12 Sector Headquarters at Balpora in Shopian.

Normal life came to a standstill across the Valley on Sunday as people largely obeyed the strike call issued by the JRL.

The authorities had earlier suspended internet services in four districts whereas a security clampdown is being enforced in central Srinagar and parts of Shopian and neighbouring Pulwama districts.

Mobile internet services have been shut down in Shopian, Pulwama, Anantnag and Kulgam districts of south Kashmir while the speed has been reduced to 128 kbps in rest of the Valley.

Chief Minister, Mehbooba Mufti, enraged over the incident, on Saturday evening telephoned Defence Minister, Nirmala Sitharaman, to say that such incidents only cause setback to the efforts made at political level to bring about peace and normalcy in the State.

As was claimed in an official statement issued in winter capital Jammu, the Defence Minister assured the Chief Minister that she would seek a detailed report on the incident and would impress upon the field formations that mechanisms put in place are strictly adhered to so that such incidents do not recur in future.

The residents of Ganowpora have claimed that the troops opened fire onto a group of youth after “few stones” were hurled at their vehicles.

They also said that soldiers from the Army’s 14 Rashtriya Rifles had come to the village on Saturday morning to tore down the posters which carried ‘tribute’ to a local youth Firdous Ahmed Lone who was among two Hizb-ul-Mujahedin cadres  killed in an encounter with the security forces in neighbouring Chaigund village on Wednesday.

They said that around 3 pm a convoy of the Army 10 Garhwal stationed at nearby Balpora village passed through the Ganowpora and some local youth hurled stones at it following which the Armymen on board opened fire at them.

The Army, on the other hand, said that its men had to open fire in self-defence to prevent the lynching of a JCO by the mob.

The statement said that an Army administrative convoy was passing through Ganowpora chowk (square) when it came under “unprovoked and intense stone pelting by a group of 100-120 stone-pelters” at around 3 pm.

It further said, “Within no time, their numbers swelled to 200-250 persons. The crowd surrounded an isolated portion of the convoy consisting of four vehicles. They caused extensive damage to these vehicles and tried to set them on fire. A JCO accompanying the convoy got hit on the head and fell unconscious suffering serious injury. The mob tried to lynch the individual and snatch his weapon. The violent crowd further closed in towards the vehicles and attempted to set them on fire.”

The statement further said, “Considering the extreme gravity of the situation the Army was constrained to open fire in self defence to prevent lynching of the JCO and burning of Government vehicle by the mob.”

The Army said that seven jawans were injured whereas eleven vehicles suffered damage in the mob attack. It also released photographs of two damaged vehicles.