In past one week, about 100 political activists have been taken into ‘preventive custody’ across the Union Territory 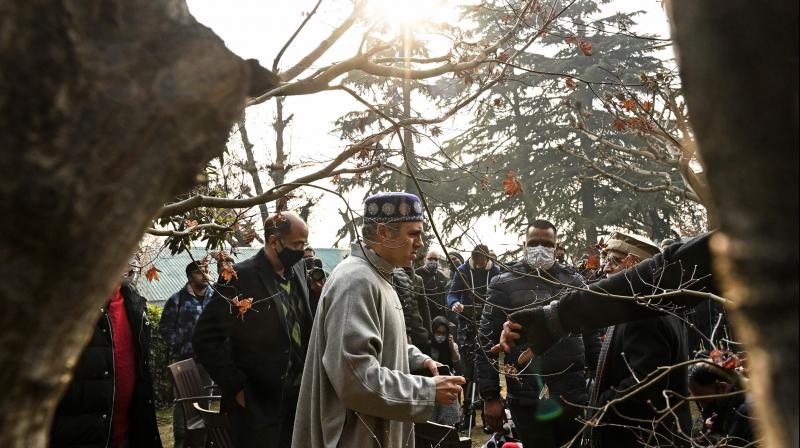 mar Abdullah, former chief minister of Jammu and Kashmir speaks after a press conference at his residence, in Srinagar on December 26, 2020. (AFP)

Dec. 26: Jammu and Kashmir police have, once again, gone on arrest spree. In past one week, about 100 political activists have been taken into ‘preventive custody’ across the Union Territory and, as per official sources, some of them may be formally detained under the stringent Public Safety Act (PSA) to “prevent breach of peace”.

The police began taking opposition political leaders and activists into ‘preventive custody’ on December 21, a day before the counting of votes in the recently held District Development Council (DDC) elections in the UT. Among the first apprehended included senior People’s Democratic Party (PDP) leader and former minister Naeem Akhtar and two other former lawmakers Muhammad Sartaj Madni and Mansoor Hussain.

Though the authorities refused to give out the exact number of the detainees, unofficial sources put the number at 75 to 100. They include second-rung leaders and activists mainly of PDP and National Conference (NC)-two main constituents of opposition parties’ amalgam ‘People’s Alliance for Gupkar Declaration (PAGD) and those of separatists organizations, mainly Jamaat-e-Islami.

The official sources said that “undesirable” political activists, separatist leaders and Over Ground Workers (OGWs) of militants are being taken into preventive detention and some of them are likely to be booked under the PSA to prevent “breach of peace”.

But the NC has alleged that the arrest of mainstream political activists is to make horse-trading of elected DDC members easy. NC vice-president and former chief minister Omar Abdullah accused the J&K administration led by Lieutenant Governor, Manoj Sinha, of (mis)using police to force the winning candidates of PAGD to join Jammu and Kashmir Apni Party (JKAP), which he called ‘B-Team’ of the BJP.

“On one hand, Prime Minister, Narendera Modi, and J-K LG Manoj Sinha boasts on DDC polls and claim democracy has won, but on the other hand, democracy is being discredited,” he said while addressing a press conference here on Saturday.

Flanked by party general secretary Ali Muhammad Sagar and provincial president (Kashmir) Nasir Aslam Wani, Mr. Abdullah played a purported call recording in which the husband of a woman DDC candidate namely Yasmeena Jan who was elected from Imam Sahab segment of southern Shopian on NC ticket could be heard admitting to another person how he made his wife join Apni Party in lieu of getting her brother released from detention. “I swear in the name of God and his Messenger, Altaf Bukhari (chief of the JKAP) has promised that Farooq will be released within three days.”

Mr. Abdullah alleged, “Winning candidates of PAGD are being threatened, humiliated and coerced to join Apni Party, which is a B-team of BJP”. He said, “I don’t know the reasons on whose command this all is being done.”

Earlier he had while tweeting a photograph showing Ms. Jan and two other new entrants with Mr. Bukhari at the time of their joining the JKAP and a screenshot of official document declaring her a winner on NC’s symbol plough, Mr. Abdullah had said, “This explains why our leaders in Shopian district are being put under ‘preventive arrest’ by the police. J&K police & the administration are facilitating horse trading & defections. The woman shown here joining the BJP’s B-team contested & won elections on a NC mandate.”

JKAP leader and Srinagar’s Mayor Junaid Azim Mattu while reacting to the allegation wrote on micro-blogging site that when NC vice president “tweets a picture of a female DDC member joining our party and captions it as her joining ‘BJP’s B-Team’, he is consciously painting a cross on her head.” He added, “For years this targeted branding of political workers has led to murders…This is a conscious, deliberate attempt to intimidate those DDC members who want to exercise their free will.”

However, reiterating the charge, the NC leader said at his press conference that everyone including Mr. Sinha, BJP leaders including its spokesman and even Prime Minister, Narendra Modi, are beating the drums that democracy has won in J&K through DDC polls. He asked, “Why then the same democracy is being discredited by the administration which is using police to force the winning candidates to switch sides and join Apni Party.” He said that perhaps this was being done to change the verdict of DDC elections. He cautioned, “This way democracy is being murdered in J&K. I wonder if Parliament has anti-defection law, and the Assembly too has it, why the same is not being implemented with regard to DDCs in J&K and those switching sides being disqualified.”

He asserted that the verdict of DDC elections was “loud and clear” that stripping J&K of its special status and splitting it up into two UTs “isn’t acceptable to majority of people of J&K”. He added, “I don’t claim 100 percent people are with us but yes, majority have voted against August 5, 2019 decision.”