Lamenting about the state of the economy, Rahul said, 'You know about the economy. Today, unemployment is highest in 45 years.' 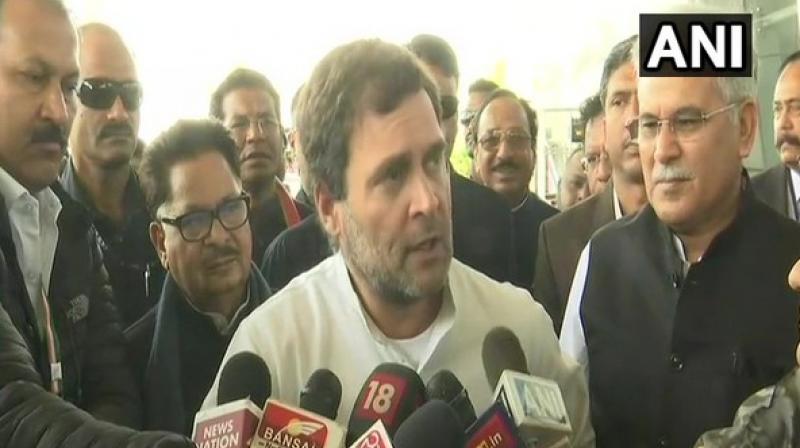 Rahul alleged that the country's time is being wasted and that money is being given to 'the 15 richest people.' (Photo: ANI)

Raipur: Congress leader Rahul Gandhi on Friday termed the National Register of Citizens (NR   C) and National Population Register (NPR) as an attack on the poor people of the country and said that it was akin to taxing them.

"I am saying that it is an attack on poor people. Poor people are asking how will we get employment? The economy earlier used to grow at 9 per cent, now it has come down to 4 per cent, that too when it is being measured by the new method. By the old method, it will be 2.5 per cent," he added.

Lamenting about the state of the economy, Rahul said, "You know about the economy. Today, unemployment is highest in 45 years. That is not so in Chhattisgarh. Because we are helping farmers here, providing them the right prices. BJP and Narendra Modi government in the country are not able to explain why they blew the Indian economy to pieces (wo ye nahi bata pa rahi hai ki unhone Hindustan ke arthvyvasthe ki dhajjiyan kyun udai)," he said while speaking to reporters here.

"Earlier the world used to say that India and China are growing at the same pace but now the world is seeing violence in India, women not feeling safe on the streets and rising unemployment," the Congress leader said.

He alleged that the country's time is being wasted and that money is being given to "the 15 richest people."

"The entire capital went to their pockets from the market. Nobody is buying anything. Factories are getting closed. It is simple economics, there is nothing difficult here. But perhaps the Prime Minister is not able to understand this," said the Wayanad lawmaker.