Katai village is about 30 minutes away from the main city of Bhiwandi by car and depends mainly on power looms for its livelihood. 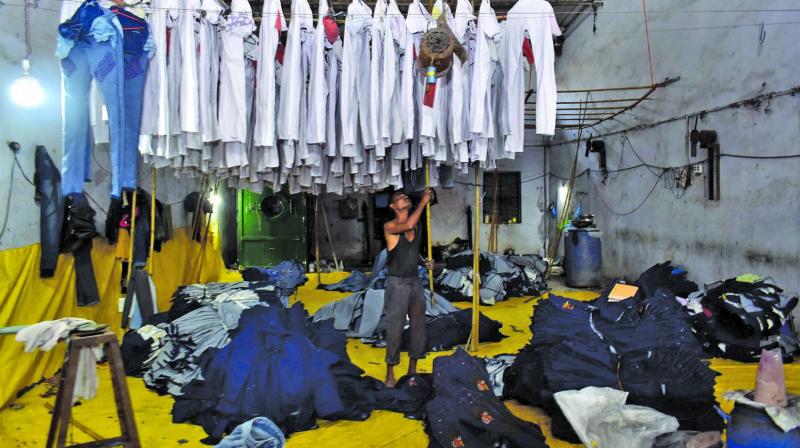 Inside a jeans washing unit in Bhiwandi. (Photo: Debasish Dey)

Mumbai: Villagers from the Katai gram panchayat in Bhiwandi are getting red water in their taps due to contaminated water released by jeans-washing units in the area. These units were barred from operating by the Bombay high court last year after the Waldhuni and Ulhas rivers turned red due to continuous contamination.

At least 50 to 60 houses in the vicinity of these units have been affected by water contamination. The locals have been dependent on boring water for daily use since the past several months. The water coming through the pipes is already contaminated as untreated water from the units seeps inside the ground and comes in contact with the boring pipes.

When The Asian Age visited one such unit in the area, it was observed that there was no facility to treat the water coming after washing the jeans. The workers used detergent and potassium permanganate to wash the jeans in a cylindrical steel body machine. “The water either flows out and gets mixed with the soil or is flushed into the nearby Kamawari River. Every day, close to 450 jeans are washed in this unit,” said a worker requesting anonymity. Katai village is about 30 minutes away from the main city of Bhiwandi by car and depends mainly on power looms for its livelihood.

“It is true that the residents are facing issues of contaminated water since a long time as all the jeans’ washing units have started settling here after the HC ruling. In my jurisdiction, there are 10 to 12 such units present and they are releasing untreated water on the ground,” said Virkar Suryakant, sarpanch of Katai. “I have served them notices in the past since they are carrying out work illegally. The units have approached the Ulhas Nagar Municipal Corporation (UMC) to solve the issue,” he added.

Water even corrodes  plastic, say residents
In addition to the acute water shortage, residents are also suffering due to water contamination. Jeans washing units have spread across the village with nearly 10-12 such units functioning without a treatment plant. The wrath of untreated water is not only being faced by the families living close to the units, but also the workers in these units. 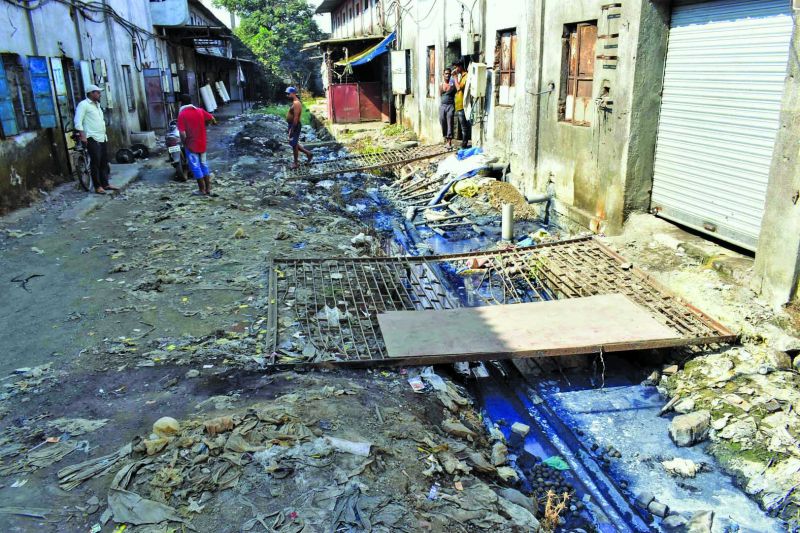 Untreated water in the drain outside the unit. (Photo: Debasish Dey)

“Every person gets access to the boring pipe for water for a mere 15 minutes. Even in that, the first two to three containers receive contaminated water. Sometimes the water is blue or red and one can see a thick layer of chemicals floating on top. If stored in a plastic container, the plastic corrodes and chips off due to the toxicity of the water. We cannot risk our health and use this water for our daily chores,” said Aisha Shaikh, a resident. She added, “We have to rely on private tankers for clean water for our daily chores. It has been over a year since we are facing this issue.”

According to locals, these units had initially set up their base in Bhiwandi city and would release the untreated water into nullahs. Later, the Bihwandi Nizampur Municipal Corporation issued them notices after civic cleaners complained of skin irritation after cleaning the nullahs.

“The water sometimes looks like foamed water, which we usually see after washing clothes. It may appear clean and fresh but after two-three hours, the colour of the water changes to yellow,” said Goribi Shaikh, another resident. The workers of these units also rely on the boring water at times and the situation is not different for them too.

“The boring water is blue in color, hence I don’t use it and buy water from private tankers,” said Mizanool Shaikh, a migrant worker from West Bengal. Shaikh added that his unit manages to wash 2000-3000 jeans per day.