Will announce decision on joining politics this Sunday, says Rajinikanth

A similar meeting in May saw the superstar exhorting his fans to “be ready for war.” 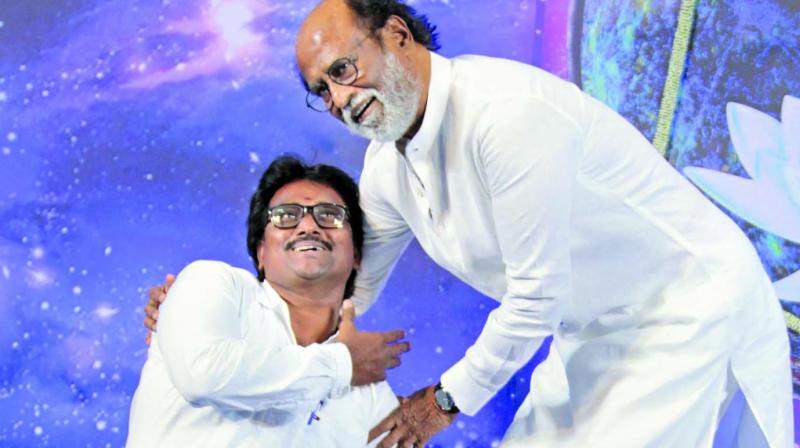 Tamil superstar Rajinikanth meets a fan on the first day of a six-day-long photo session in Chennai on Tuesday. Rajinikanth is expected to announce his decision to join politics on December 31. (Photo: PTI)

Chennai: Keeping his fans and public on suspense mode yet again, superstar Rajinikanth on Tuesday said he would announce his stand on entering politics on Sunday at the end of a six-day meet with his supporters here.

“I will announce my stand on political entry on December 31,” Rajinikanth said, sending his fans into a rapturous frenzy in his opening remarks at the event held at his Raghavendra Thirumana Mandapam in Kodambakkam.

If the fans thought that the moment they had been waiting for – their thalaivar’s political journey – had finally come after a gruelling two-decade wait, they were mistaken. The Tamil superstar, whose ‘Kala’ is expected to hit the screens in the first half of 2018, kept up the suspense by saying, “It does not mean that that I will come to politics...I will announce my stand (on Sunday),” Rajinikanth said.

Explaining to his fans on why he is hesitant to enter politics, Rajinikanth said he was in a dilemma only because he knew the entire dynamics of how the field works. “Politics is nothing new for me. I have been in politics since 1996…

Had I not known its dynamics, I would have said okay,” he said.

Referring to his “war” remark, the actor asked, “war means only election. Has it come now? If we go to war, we should win. To succeed in a war, valour alone is not sufficient, strategy is important.”

“Whether people are keen or not, the media is enthusiastic to know if I will join politics,” he said, talking about the excitement in media circles about his possible political entry.

Tuesday was the first day of six-day-long meeting that Rajinikanth Fans Club Association organised for his supporters to have an audience with him, besides clicking a photograph.

A similar meeting in May saw the superstar exhorting his fans to “be ready for war.”

Rajinikanth has been ambivalent on his political entry since 1996, when he openly put his weight behind the DMK and then fledgling Tamil Maanila Congress that helped the Dravidian party capture power with a brute majority. After his appeal to vote for DMK-TMC alliance in 1998 and to defeat the PMK in 2004 failed at the hustings, the superstar kept low when it came to politics only to speak about it in 2017 after the demise of former chief minister J Jayalalithaa the previous year.