Jadhav's mother and wife faced the verbal assault as they were forced to wait for their car after emerging from the Pak foreign office. 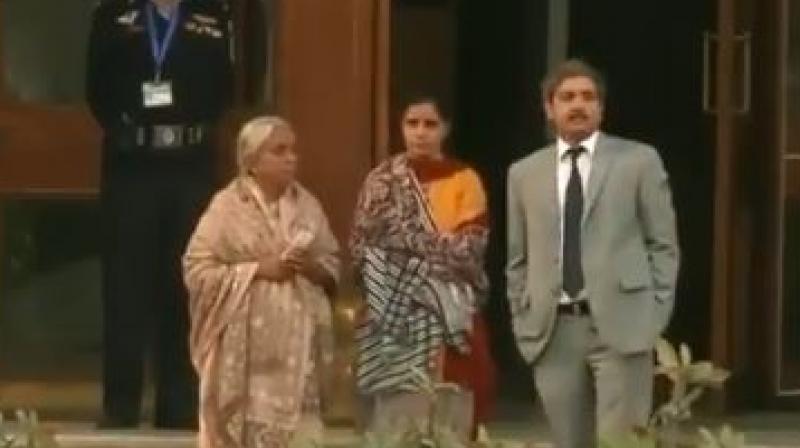 Jadhav's mother and wife did not respond to any of the posers by Pak media and in the footage it was seen that they turned away from the media and went inside. (Photo: Screengrab)

New Delhi: Kulbhushan Jadhav's mother and wife who were in Islamabad on Monday to meet him were heckled, harassed and subjected to outrageous questions by journalists from the Pakistan media after the 40-minute meeting with the former navy officer sentenced to death in Pakistan.

"Aapke patidev ne hazaron begunah Pakistaniyo ke khoon se Holi kheli ispar kya kahengi? (your husband killed thousands of innocent Pakistanis, what do you have to say about that?)'" was a question shouted at Kulbhushan Jadhav's wife Chetankul Jadhav.

The wife and mother of Jadhav, who made innumerous efforts from India, met the former navy officer after over a year.

They faced the verbal assault as they were forced to wait for their car after emerging from the Pakistan foreign office after their meeting with Jadhav across a glass screen.

They did not respond to any of the posers by the Pakistan media and in the footage it was seen that they turned away from the media and went inside. India's Deputy High Commissioner JP Singh is seen throwing up his hands in exasperation.

The officials present at the foreign office also did not stop the media from asking questions to Jadhav's mother and wife and cleared the area for the photo journalists to click pictures.

Jadhav's wife and mother had to wait for almost two minutes for the car which gave the media ample time to accuse them with insensitive questions.

India on Tuesday denounced Pakistan over the treatment of the Jadhav family.

New Delhi has alleged that the women were forced to change before meeting Jadhav and were also asked to remove their mangalsutra, bindi and bangles.

The Government also accused the Pakistanis of refusing to return the shoes of Jadhav's wife Chetankul after she was forced to turn them over to security.

Jadhav's family handled the meeting "with great courage and fortitude", said the MEA spokesperson in a statement, accusing Pakistan of using the meeting to try and "bolster a false and unsubstantiated narrative of Jadhav's alleged activities."

The Government said the cultural and religious sensibilities of family members were disregarded and they were prevented from talking in their native Marathi language and "repeatedly interrupted while doing so". Jadhav's mother was also stopped from talking to her son when she was conversing in Marathi.

Jadhav's wife and mother were allowed to see him but behind a glass partition on Monday, eight months after he was sentenced to death.

Pakistan projected it as a "grand gesture" but India said its choreographed propaganda had been exposed.

With inputs from ANI