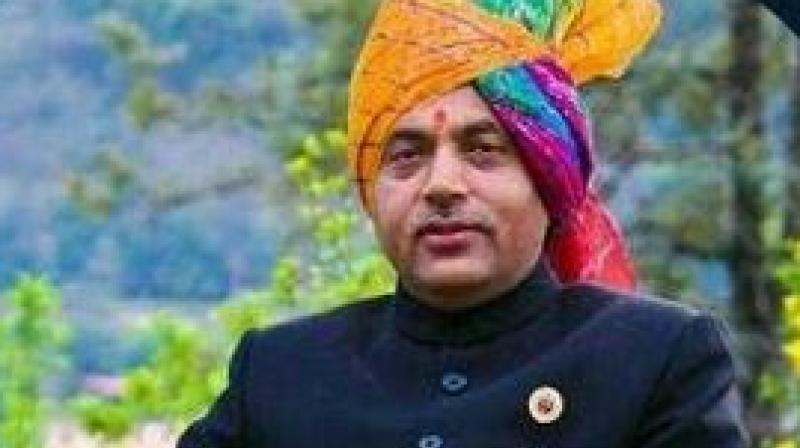 BJP has won 44 seats in 68 member house and there are several claimants including senior leaders and former ministers for a berth in the cabinet. (Photo: Twitter/@jairamthakura)

The ceremony would be held in the forenoon at 11 am, they added.

The names or number of ministers in the new Himachal government was not revealed even as Thakur held meetings with senior leaders J P Nadda, Prem Kumar Dhumal and Mangal Pandey, who is the BJP's incharge for party affairs.

BJP has won 44 seats in 68 member house and there are several claimants including senior leaders and former ministers for a berth in the cabinet.

The Ridge Ground turned saffron with BJP flags fluttering all around and cut outs of Modi, Amit Shah and Jai Ram Thakur dominating the scene.

Massive security and other arrangements have been made for the grand function and the Ridge, Annandale helipad and Jubbar-Hatti airport were under the protection of the SPG.

PM Modi, who visited Shimla on April 27 and addressed a rally would be visiting the hill city after eight months on Wednesday.

About 1,000 security men have been deployed on security duty besides intelligence men in plain clothes.

Security has been beefed up and sharp shooters have been deployed at several locations and all entry points at interstate borders are under vigil, DGP Somesh Goyal said.

Most of the VVIPs would land at Jubbar-Hatti airport and be flown to Annandale helipad by choppers and finally taken to the venue of the rally in a carcade to avoid disruption of normal traffic and a corridor has been kept for emergency services like movement of ambulances.

Heavy vehicles and buses coming from outside would be stopped at the borders and sent back to identified parking places after dropping the passengers while light vehicles would be permitted upto tunnel 103 and Indian Institute of Advanced Study (IAAS), officials said.

Besides seating arrangements at Ridge, LCD screens have been installed outside the venue to facilitate viewers watch the ceremony.

This is for the fourth time that the swearing in ceremony is taking place outside Raj Bhawan at the Ridge.

Dr Y S Parmar was administered oath at the Ridge in the presence of the then prime minister Indira Gandhi after Himachal attained statehood on January 25, 1971.