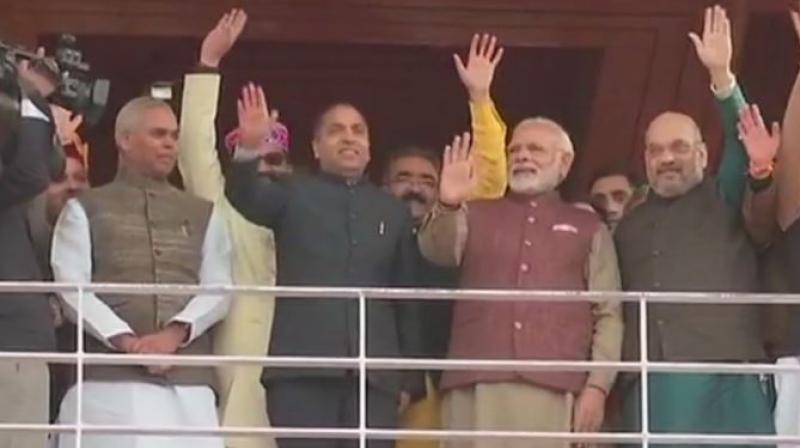 'People have shown faith in us, will try to meet their expectations,' the newly-elect CM of HP said on Wednesday morning. (Photo: ANI/Twitter)

The new government led by Thakur took the oath of office and secrecy at a grand ceremony in the presence of Prime Minister Narendra Modi, BJP president Amit Shah, and a galaxy of senior BJP leaders and chief ministers of NDA-ruled states.

Along with Thakur several others were also sworn-in by Governor Acharya Dev Vrat.

"People have shown faith in us, will try to meet their expectations," said the newly-elect chief minister of Himachal Pradesh on Wednesday morning.

The 52-year-old five-time legislator was picked to be the hill state's 14th chief minister after PK Dhumal, projected by the BJP for the top post, lost his election even as the party swept 44 of the state's 68 seats.

Massive security and other arrangements have been made for the grand function and the Ridge, Annandale helipad and Jubbar-Hatti airport were under the protection of the SPG.

About 1,000 security men have been deployed on security duty besides intelligence men in plain clothes.

Security has been beefed up and sharp shooters have been deployed at several locations and all entry points at interstate borders are under vigil.

Besides seating arrangements at Ridge, LCD screens have been installed outside the venue to facilitate viewers watch the ceremony.

This is for the fourth time that the swearing in ceremony is taking place outside Raj Bhawan at the Ridge.

Dr Y S Parmar was administered oath at the Ridge in the presence of the then prime minister Indira Gandhi after Himachal attained statehood on January 25, 1971.