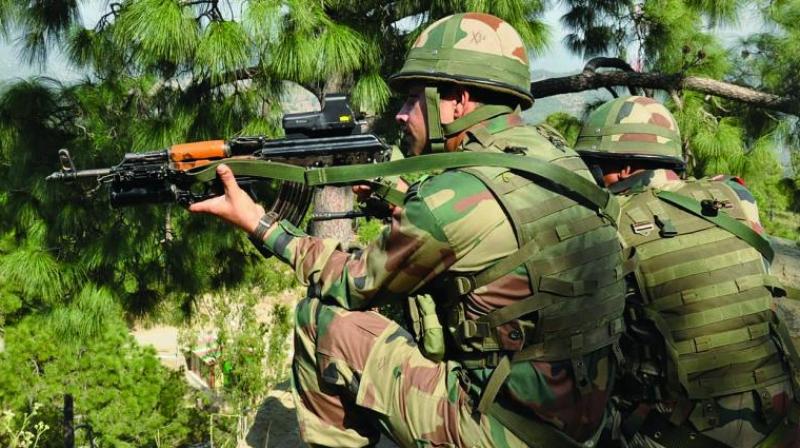 New Delhi/Srinagar: In a strong sign that the pre-2003 days of frequent hit-and-runs across the Line of Control (LoC) have kicked back, an Indian Army team comprising “Ghatak” commandos crossed the LoC by about 250-300 metres to smash a temporary Pakistan Army post, killing at least three Pakistani soldiers and wounding at least one. The post belonged to the Baloch Regiment’s 12 Division.

The incident took place at around 6 pm on Monday evening across the line from Poonch in Rakhchikri in the Rawlakot sector of Pakistan-occupied-Kashmir.

While the Army refused to either confirm or deny the incident, an official source familiar with the incident described it as “localised tactical selective targeting”, which means it was planned and executed at the local level in what is seen as a retaliation for Saturday’s attack by Pakistani forces in the Keri sector, which claimed the lives of three Indian jawans and one officer, a major.

On Sunday, a Pakistan Army sniper was also gunned down in the Jhangar area of Rajouri.

The site of the incident is one of the areas along the LoC where the militaries of the two nations are locked in an almost eyeball-to-eyeball situation, with the Indian Army largely dominating positions due to altitude and terrain advantages. Both armies normally undertake offensive action in areas where they hold the terrain advantage.

The 1996-2002 period was a particularly torrid time as both Indian and Pakistani soldiers freely indulged in hit-and-run incursions into each other’s areas. Two things ended it — warming of ties leading to a comprehensive ceasefire agreement in November 2003 and a double concertina-wired fence across the length of the LoC that was completed in 2004.

The Pakistani posts are at a distinct disadvantage due to dense inhabitation very close to the LoC while the Indian side has a very sparse population.

An interesting fact this time was that Pakistan’s Inter-Services Public Relations (ISPR) promptly admitted the casualties on its side, leading to the suspicion that there could possibly be many more casualties.

Admitting to the casualties due to “heavy cross-border shelling by Indian forces”, the ISPR said in a statement that the Indian shelling at Rukh Chakri sector “received a strong response” from Pakistani forces. It accused India of initiating the “unprovoked ceasefire violation” that led to an exchange of fire between the facing armies.

The 745-km LoC has witnessed a series of cross-border clashes in recent months, leaving many Army personnel and civilians dead and injured on both sides.

In 2017, till Tuesday, the Indian Army suffered 61 casualties, including of three Garud commandos, while battling insurgency in Kashmir. While 31 died along the LoC in counter-terror operations, 14 were killed in ceasefire violations and 17 in combating infiltration bids. The total number of ceasefire violations in 2017 stood at 820, an about 270 per cent spike from 221 in 2016. On the other hand, in 2017, while 62 militants were gunned down in Jammu and Kashmir along the LoC, 148 were killed in the hinterland.