2 other members -- Sudhir Mungantiwar of the BJP and Devendra Bhuyar of the Swabhimani Paksh -- did not take oath today. 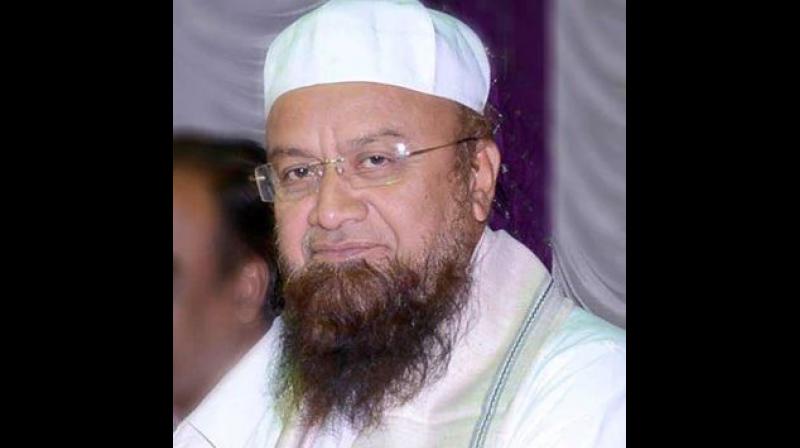 Ismail arrived late as he got stuck in traffic, while Baldi, the MLA from Uran in Raigad district, was held up as the ferry boat which he boarded to reach Mumbai from Alibaug, broke down, he said. (Photo: Facebook | Mufti Ismail Qasmi)

Mumbai: A special session of the 14th Maharashtra Legislative Assembly was held in Mumbai today where oath was administered to 285 newly-elected members.

In the 288-member House, two members -- Mahesh Baldi (Independent) and Mohammed Ismail of AIMIM -- were administered oath in the Speaker's chamber today as they arrived after the House was adjourned, legislature secretary Rajendra Bhagwat said.

Ismail arrived late as he got stuck in traffic, while Baldi, the MLA from Uran in Raigad district, was held up as the ferry boat which he boarded to reach Mumbai from Alibaug, broke down, he said.

Two other members -- Sudhir Mungantiwar of the BJP and Devendra Bhuyar of the Swabhimani Paksh -- did not take oath today, a Vidhan Bhavan official said.

Bhagwat said a decision on the date for Speaker's election will be taken after the Cabinet meeting, following the swearing-in of Shiv Sena chief Uddhav Thackeray as chief minister on Thursday.

Pro tem Speaker Kalidas Kolambkar took oath on Tuesday after being appointed to the post by Governor Bhagat Singh Koshyari.

However, sources in the Congress said the election for the Speaker's post will be held on November 30.

Earlier in the morning, NCP MP Supriya Sule greeted party MLAs Ajit Pawar and Rohit Pawar at Vidhan Bhawan entrance before the commencement of the session. "This day comes with a big responsibility," she said.

In the House, Kolambar announced Babanrao Pachpute, Vijaykumar Gavit and Radhakrishna Vikhe Patil as the presiding officers for administering oath of the members.

Names of members were called out on the basis of seniority.

Ajit Pawar was greeted with thumping of desks from NCP members when he went to the podium to take oath.

Newly-elected Shiv Sena leader Aaditya Thackeray, who made his electoral debut by winning from Worli seat in Mumbai, was congratulated by members cutting across party lines.

The 29-year-old son of Sena chief Uddhav Thackeray went up to all senior members to greet them.

Dhiraj Deshmukh of Congress and Rohit Pawar of NCP were also among the newcomers who took oath.

The newly-elected members could not take oath earlier even one month after the results of the Assembly polls were announced due to dramatic political developments in the state.

The state remained under President's rule for 13 days between November 12 and 23 after no political party was able to form a government.

The Supreme Court on Tuesday asked Koshyari to appoint a protem speaker and ensure all elected members of the House are sworn in today by 5 pm.

The "Maha Vikas Aghadi" comprising the Shiv Sena, the NCP and the Congress, on Monday submitted a letter claiming support of 162 MLAs to the governor.

The NCP has announced that Uddhav Thackeray would be the next chief minister of Maharashtra.

He will be sworn in CM on Thursday evening at Shivaji Park in Dadar, the place where his party holds the traditional Dussehra rally each year.