Telangana politician attempts suicide after police raid at his residence

Reddy is contesting the ensuing Telangana polls from Gajwel constituency on a People's Front assembly ticket. 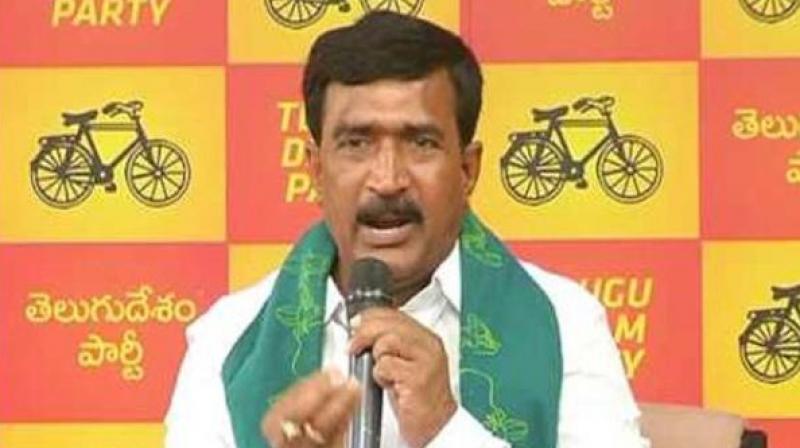 Reddy, however, alleged that the police barged into his residence and tried to kill him by setting him ablaze. (Photo: PTI)

Hyderabad: Tension prevailed at politician Vanteru Pratap Reddy's residence here after he attempted to commit suicide following a police raid at his residence.

Reddy is contesting the ensuing Telangana polls from Gajwel constituency on a People's Front assembly ticket.

Sharing details of the incident, PV Padmaja, Deputy Commissioner of Police, Balanagar, Cyberabad told ANI, "Quthbullapur flying squad asked for the assistance of Petbasheerabad police to conduct checking at the residence of Vanteru Pratap Reddy in Alwal area after receiving complaint that some illegal activity of distributing money and liquor is going on. On which petbasheerabad police along with Quthbullapur flying squad went to the residence of Onteru Pratap Reddy which is in the limits of Petbasheerabad police station and conducted checking".

"Meanwhile Pratap Reddy along with his supporters came and started misbehaving with officials and Pratap Reddy poured petrol on himself and tried to attempt to commit suicide and created drama. There was nothing found and seized from his residence. If flying squad lodges a complaint action will be initiated on the persons for misbehaving and abusing the officials. Further inquiry is underway," he added.

Reddy, however, alleged that the police barged into his residence and tried to kill him by setting him ablaze.

Security has been beefed up in the state of Telangana in lieu of assembly elections. Election Commission has directed law enforcement agencies to maintain a strict vigil on all illegal activities.

The Telangana Assembly elections are scheduled to be held on December 7 to elect representatives of 119 constituencies. The counting of votes will take place on December 11.