PM only person to play despicable politics during 26/11 attacks: Cong

Congress' attack came after PM said that Cong which was in power when 26/11 attacks took place, had questioned BJP's surgical strikes. 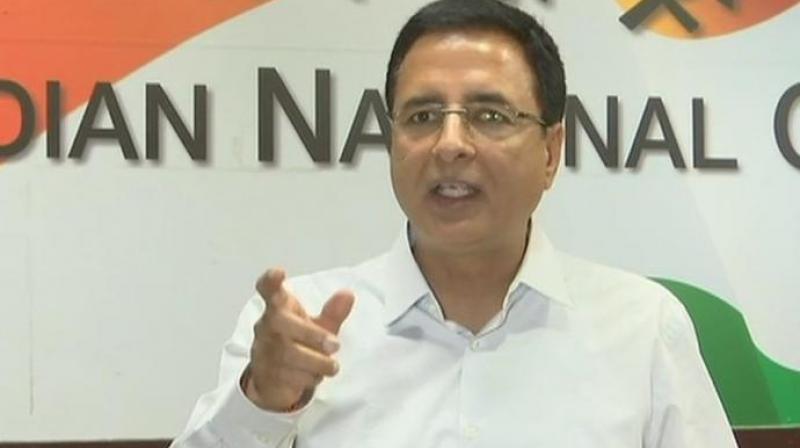 Congress chief spokesperson Randeep Surjewala alleged that lack of political action on the part of the BJP-led central government had led to disquiet at the border and an alarming security situation. (Photo: File)

New Delhi: The Congress on Monday hit back at Prime Minister Narendra Modi after he criticised the party on issues of terrorism and Naxalism, alleging he was playing politics on matters of national security and had "compromised" the country's interests.

Congress chief spokesperson Randeep Surjewala alleged that lack of political action on the part of the BJP-led central government had led to disquiet at the border and an alarming security situation. He said that "16 major terror strikes" were held on security installations during the last 54 months.

The Congress' attack came after PM Modi said at a poll rally in Bhilwara, Rajasthan that the party, which was in power when 26/11 Mumbai attacks took place, had questioned the BJP government's surgical strikes in Pakistan.

PM Modi said when terrorists struck the country's financial capital 10 years ago, the country was governed by "madam" through remote control, an oblique reference to UPA chairperson Sonia Gandhi.

"Politicizing of national security and sacrifice of our jawans is intrinsic to BJP," he said.

"The truth is - Modi Government has compromised our national security and in the last four and a half years. Lack of political action and policy has led to a disquiet border and an alarming internal security situation," Randeep Surjewala alleged in a statement.

"Even as our soldiers fought inside and the nation was united in battling its consequences, the then chief minister of Gujarat, was standing outside at one of the attack sites, addressing the media and blaming the then UPA Government for the attack," he alleged.

He said the BJP released "blood-stained ads in newspapers for Delhi elections, opportunistically politicizing the sacrifice of our soldiers".

"Today in a public rally in Bhilwara, Rajasthan, PM Modi turned history on its head and said that he never played politics on national security. We condemn and reject the utter falsehood...," he said.

The Congress leader alleged that the prime minister and the BJP have always used the "blood and sacrifice of our jawans as a vote garnering tool".

He alleged that BJP President Amit Shah dishonoured the valour of the armed forces on October 7, 2016 by "disregarding the supreme sacrifices made in the five wars and numerous surgical strikes".

Surjewala said the BJP went to the extent of organizing events felicitating the prime minister in Agra and Lucknow and said, "It is intriguing and disappointing that Modi Government did not celebrate the first anniversary of surgical strike and started limited celebrations only in the second year".

Surjewala asked a set of 15 questions, including whether "it is true that in last 54 months of Modi Government, in Jammu and Kashmir alone, 426 jawans have been martyred and 278 civilians have lost their precious lives, in Pakistan sponsored terrorism".

"Is it not true that 16 major terror attacks have taken place on our security installations that include CRPF Camps, Army Camps, Air Force Station and Military Stations- Pampore, Uri, Pathankot, Gurdaspur, Amarnath Yatra attack, Sunjwan Army Camp, where scores of our precious lives have been lost?" he asked.

"Is it not true our jawans like Shaheed Mandeep and Shaheed Narender Singh were beheaded and bodies mutilated by Pakistan, as Modi Government remained a mute spectator," he asked.

Randeep Singh Surjewala claimed that there is 500 per cent increase in ceasefire violations by Pakistan, since May 2014.

"Where is the '56-inch chest' missing as Pakistan commits more than 3,000 ceasefire violations at the LoC and International border," the Congress spokesperson asked.

"Why did PM Modi invite the rogue ISI to investigate the Pathankot terror attack on March 27, 2016," he asked.