On anniversary of 26/11, PM Modi takes patriotism jibe at Cong 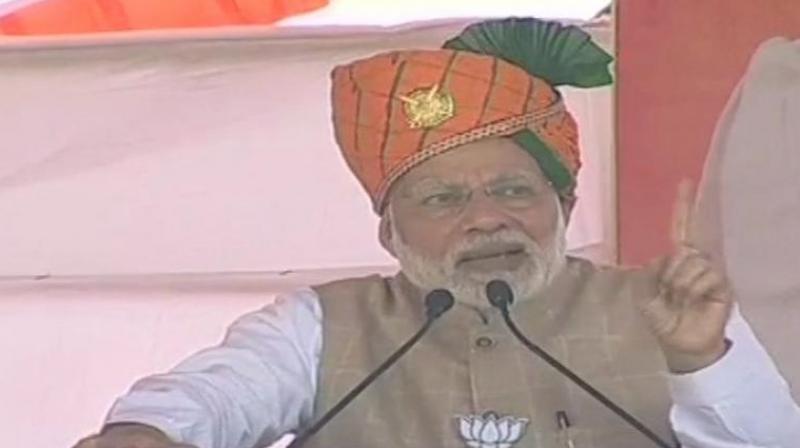 The PM urged people to vote for the BJP in Rajasthan to maintain the speed of development in the state. (Photo: ANI | Twitter)

New Delhi/ Bhilwara/Kota: Launching a frontal attack on the Congress Party and its president Rahul Gandhi, Prime Minister Narendra Modi on Monday claimed that the Congress, which was leading the coalition government in 2008 when the Mumbai terror strikes took place, was “giving lessons in patriotism” but had questioned his government when the surgical strikes were carried out. Addressing a poll rally in Rajasthan’s Bhilwara on the 10th anniversary of the attacks, when 10 Pakistani terrorists had sneaked into Mumbai, killing 166 people over 60 hours, Mr Modi said India would never forget the 26/11 attack and its perpetrators, and was looking for an opportunity to bring them to justice.

“When the Army carried out the surgical strike going into enemy territory, the whole country felt proud but the Congress raised questions on it and demanded video proof,” said Mr Modi, and asked: “Will commandos carry cameras to provide proof?” Rajasthan will go to the polls on December 7 and the counting in all states will be on December 11.

“Delhi was ruled by madam (in 2008)... The world was shaken, but the Congress was playing how-to-win-the-election game,” Mr Modi said, referring to Mrs Sonia Gandhi, who was widely regarded as the real power behind then Prime Minister Manmohan Singh. “I remember the slightest criticism over the attacks used to rile the then ruling party,” Mr Modi said.

“India will never forget 26/11 or its perpetrators. We are looking for an opportunity... The law will take its own course, I assure the people of the country,” said Mr Modi, adding that “justice will surely be done”, as he expressed solidarity with the families of those who lost their lives.  He said a grateful nation bowed to its brave police and security forces who had valiantly fought the terrorists during the Mumbai attacks.

Addressing another rally in Kota, Mr Modi said that after coming to power, the BJP had stopped the “loot” that was being carried out under Congress rule and “people sitting in AC rooms in New Delhi” were trying to devise strategies to oust the party. He said one vote doesn’t enthrone a political party or an individual, but it gives power to change the country and shape its future.

Mr Modi said “people sitting in AC rooms in Delhi” were trying to devise strategies to oust the BJP from power, but they should come to Rajasthan’s Kota town and see the ground situation. He claimed an army of thieves had siphoned off Rs 90,000 crores to claim pensions, scholarship and LPG subsidy by fudging information in government records, but one vote given to the BJP government at the Centre had put a stop to such dubious beneficiaries.

“The Rs 90,000-crore theft was stopped, the broadband network reached one lakh villages, 2.5 to 3 lakh km optical fibre lines were laid, 12 crore LPG connections were given in four years of the BJP government at the Centre... Your one vote has given speed to the country. It has the power to change the country and shape its future,” Mr Modi said.

He alleged that while it was in power, the Congress kept devising new ways to loot money. “We stopped the work of looters, who siphoned off money, with your one vote that formed the BJP government. Such people are criticising Modi today,” he said. The PM urged people to vote for the BJP in Rajasthan to maintain the speed of development in the state.