Shukla’s poll managers have generated resources through crowd funding and from his followers in social media, Facebook, WhatsApp and Twitter. 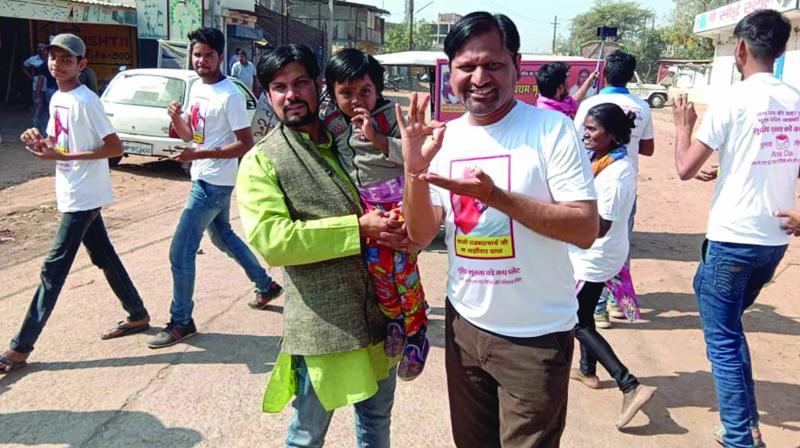 Mr Shukla , 32, who quit his lucrative job in Infosys to take a plunge into electoral politics “to give justice to disadvantaged sections of society”, appears to be leaving a deep impact on the voters of the constituency, with his unique campaign style, conceived, choreographed and executed by his army of speech and hearing impaired volunteers and supported by a couple of sign language experts who act as interpreters for him to communicate with his voters.

“I tell voters that I am speechless, but I will speak through my actions, if given a chance,” Mr Shukla told this newspaper through his interpreter and sign language expert Gyanendra Purohit.

He has been fielded by the Apna Dal, a constituent of the National Democratic Alliance (NDA). His key poll strategist is Raghav Veer Joshi, an ex-MP of Nepal and first deaf and mute elected representative in Asia.

“Every morning, Mr Joshi mentors me giving tips on campaigning through video conferencing from Kathmandu. My team prepares poll strategies based on his tips,” Mr Shukla said.

Mr Shukla’s poll managers have generated resources through crowd funding and from his followers in social media, Facebook, WhatsApp and Twitter.

The recent shocking incident of rape and sexual harassment of more than a dozen deaf and mute girls in a shelter home in Bhopal by the orphanage promoter inspired Mr Shukla to take a plunge into electoral politics.

He is pitted against Shankarlal Tiwari of the BJP, Sidharth Kushwaha of the Congress, Pushkar Singh of the BSP and 26 others.

At dawn, Mr Shukla, accompanied by his poll troupe of 87 speech and hearing impaired volunteers and interpreters, his sister Shradha and Mr Purohit, hit the streets.

His campaign troupe dance to the tune of a song, composed by his sister and lent voice by his friend Kamal Shukla, while seeking vote for him. “The elderly people shower blessings on Sudeep and assuring him of their unflinching support,” said Mr Purohit, who had played an important role in bringing back Madhya Pradesh’s deaf and mute girl Geeta from Pakistan to India a couple of years ago.