India   All India  27 Nov 2018  Lord Ram belongs to world, why Ram temple should be built in Ayodhya: Farooq Abdullah
India, All India

Lord Ram belongs to world, why Ram temple should be built in Ayodhya: Farooq Abdullah

Abdullah, however, went on to ask whether one was ready to accept a Supreme Court verdict in the matter. 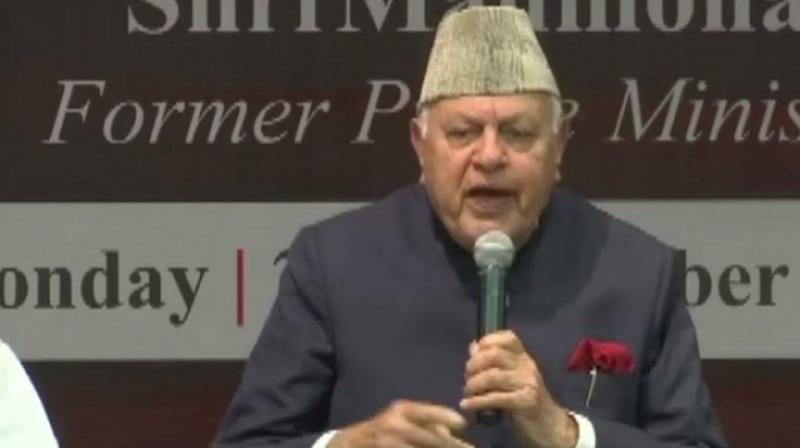 During a discussion after the launch of Congress leader Manish Tewari's book 'Fables of Fractured Times', Abdullah said, 'Lord Ram belongs to the world and is omnipresent. Why do you want to build a temple in Ayodhya?' (Photo: ANI | Twitter)

New Delhi: Former Jammu and Kashmir chief minister Farooq Abdullah on Monday asked why a Ram temple should be built in Ayodhya as Lord Ram is omnipresent and belongs to the world.

This was, however, countered by JD(U) leader Pavan Verma who asked "why not" and Farooq Abdullah said that he has no objection to the construction of the Ram temple.

During a discussion after the launch of Congress leader Manish Tewari's book "Fables of Fractured Times", Abdullah said, "Lord Ram belongs to the world and is omnipresent. Why do you want to build a temple in Ayodhya?"

This was immediately countered by Pavan Verma, who asked Why can't Ram temple be built in Ayodhya.

If Hindus want a temple in Ayodhya, as it is the birthplace of Ram, why not build the temple, the JD(U) leader asked.

"If Hindus want a temple let there be a temple. The question is not whether a temple should be built. The question is how it will be built - by use of force or violence or by mutual agreement or court orders?" he said.

Abdullah, however, went on to ask whether one was ready to accept a Supreme Court verdict in the matter.

The Supreme Court last month had said that an "appropriate bench" will decide in the first week of January the schedule of hearing of the Ram Janmabhoomi-Babri Masjid land dispute case.

"You want to put the Supreme Court in cold water," the NC leader alleged and asked whether we are living in a democracy.

"Why not build a temple at Sitamarhi in Bihar for Goddess Sita," Abdullah asked.

"All Muslims have said they will abide by what the court says," he said, to which Verma replied, "Now we are in agreement."

Asserting that governors should not be puppets in the hands of the Centre, Abdullah said, "They should be men of integrity who uphold the Constitution."

His comments came in the wake of Jammu and Kashmir Governor Satya Pal Malik abruptly dissolving the Assembly Wednesday night hours after the PDP staked claim to form a government with the backing of rival NC and the Congress followed by another bid from the two-member People's Conference which claimed the support of the BJP and 18 legislators from other parties.

Abdullah said, "Our governor does not even have a fax machine. How could they have sent us a communication? Would God have descended from heaven to tell us."

He also said the Congress should have given the Bharat Ratna award to former prime minister Atal Bihari Vajpayee when he was in good health.

He also asked the Congress to allow regional leaders to grow and said the party was suffering as it did not do so.

On the attacks on India's first prime minister Jawaharlal Nehru and other former premiers, he said, "If we are here, it is because of the legacy that has been passed on to us. His (Modi's) conduct is just not becoming of a prime minister. I have never referred to my mother in my political speeches. Why is he doing so?"

Asserting that nobody can divide India as long as the people remain united, he said India would be able to prevent any future terrorist attacks as long as "our own house remains united".

He claimed that it was because of the people of Kashmir that terrorists are being killed and Pakistan will not success to separate Kashmir from India.

"Our successes are not because of intelligence but because common people are fed up with terrorists and they are giving exact information," Abdullah said.

"Pakistan is a rogue state. It is dependent on its army. But if we are united, nobody is so powerful to divide this country," he said.

"Ram does not need my vote nor does Allah need our vote. The elections are not being fought on developmental issues," he lamented.

"Do not mistrust Indian Muslims. We are a part of this land. We have never taken directions from Pakistan. We decided not to participate in the elections because they (BJP) were playing with Article 370 and 35A," he said.