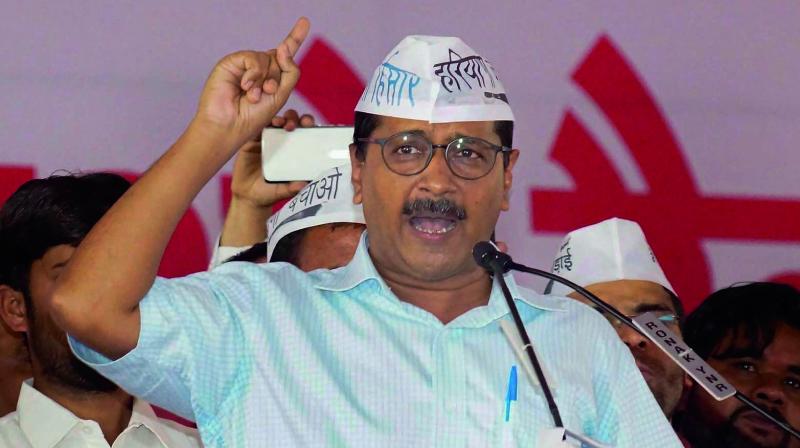 Kejriwal made the remarks at a function to mark the sixth foundation day of the party here. (Photo: File)

New Delhi: Aam Aadmi Party (AAP) chief Arvind Kejriwal Monday asserted that Delhiites are proud of him as an honest chief minister, while questioning the people of the country if they felt the same about their prime minister.

Kejriwal made the remarks at a function to mark the sixth foundation day of the party here. Speaking at the party headquarters, the Delhi chief minister claimed that the AAP government in the national capital did "much more" during its three-year rule than what Narendra Modi did in 12 years as chief minister of Gujarat. Congratulating party workers and supporters, he said the AAP's political revolution against corruption and communalism is going on despite obstacles.

"The people of Delhi are proud of their honest chief minister. I want to ask the people of the country if they feel the same about their prime minister," Kejriwal said.

He hit out the BJP-led NDA government over alleged corruption in the Rafale fighter jet deal and Vijay Mallya and Nirav Modi fleeing the country.

Targeting the Gujarat model of development, the Delhi chief minister said, "I challenge... the AAP government in Delhi did much more than he (Narendra Modi) did in Gujarat in 12 years," he said. "The AAP's political journey began on this day six years ago. The political revolution against corruption and communalism is going on despite obstacles," the chief minister tweeted.

Outlining the significance of party's foundation day, he said it could not be a mere coincidence that the AAP was formed on a day the Indian Constitution was adopted.

"At a time when the Constitution is under attack, it's only AAP that can protect it," Kejriwal said. Recalling the party's origin six years ago, the Delhi chief minister said the AAP defied all naysayers when it went on to form the government a year after its formation.

He hit out at Prime Minister Narendra Modi and BJP chief Amit Shah, saying "I feel we went on to win 67 seats by the grace of God because Shah would not have let us survive with anything less than that." Claiming that 400 files of the Delhi government were scrutinised at the behest of the Centre to find wrongdoing in its functioning, Kejriwal said he was certified as honest by the prime minister.