The RJD is eyeing the biggest share out of 40 LS seats for itself. The Cong may get 10 and the rest may go to other allies. 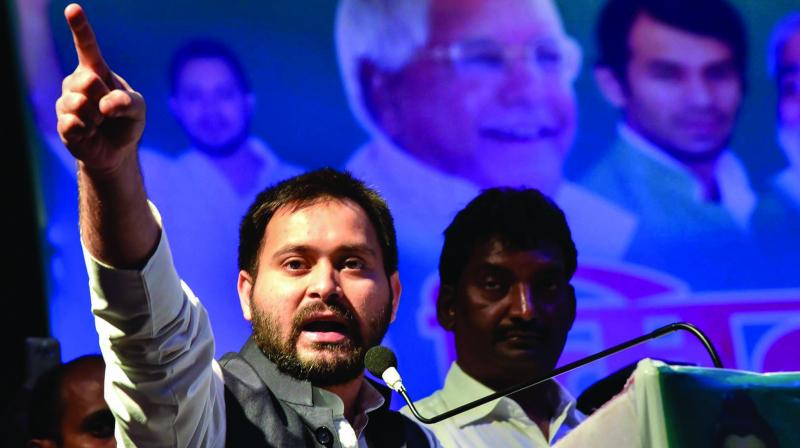 RJD leader Tejashwi Yadav is striving to attract the RLSP, an NDA ally, towards the Mahagathandhan in Bihar ahead of the 2019 Lok Sabha elections.

Patna: Former Bihar chief minister and Hindustani Awam Morcha (HAM) president Jitan Ram Manjhi seems to have caused fresh worry to the RJD by suggesting “a 20-20 formula” and asserting to contest on 20 of the 40 seats in the 2019 general elections.

“The HAM has a good presence in around 20 Lok Sabha constituencies of the state. But since other parties have also joined Mahagathbandhan, we want the RJD to consider our demand for a respectable number of seats for the general elections,” an HAM insider told this newspaper.

He added, “If we get less number of seats then Mahagathbandhan may even split in Bihar.”

The rumblings within the Mahagathbandhan come close to similar disquiet in the NDA over seat-sharing.

Political analysts are of the opinion that uneasiness over the seat-sharing issue within the HAM surfaced a day after the Rashtriya Janata Dal (RJD) invited Rashtriya Lok Samta Party’s (RLSP) chief Upendra Kushwaha to join Mahagathbandhan. The possible entry of the RLSP into the grand alliance is bothering the HAM which fears that it may not get a respectable number of seats to contest in 2019.

Mr Kushwaha, who continues to be a part of the NDA, has been issuing warnings to the BJP-led NDA for giving his party a respectable number of seats and his growing affinity for Mahagathbandhan leaders has caused concern in the NDA. The Union minister has set a November 30 deadline for the NDA to clarify if he will be offered more than the three Lok Sabha seats which the RLSP won in 2014.

Top leaders in the RJD and the Congress also went to the extent of saying that “parties in Mahagathbandhan may even sacrifice their seats to accommodate like-minded allies”.

However, when contacted for his reaction on the issue, HAM spokesperson Danish Rizwan told this newspaper, “Our party’s goal is to stop the BJP from returning to power in 2019. I am sure issues related to seat-sharing will be settled during a meeting with top leaders of the Grand Secular Alliance.”

Mr Manjhi, who is considered one of the strongest Mahadalit leaders in Bihar, is the only MLA from his party. He had floated the HAM (Secular) in 2015 and became a part of the NDA after he was removed from the JD(U) for rebelling against Nitish Kumar who had installed him as Bihar chief minister.

When Nitish Kumar returned to the NDA fold after forming a government with the BJP in July 2017, Mr Manjhi was kept out of the government.

Sources say that Mr Manjhi’s entry into Mahagathbandhan was scripted by RJD leader Tejashwi Yadav who has been trying to expand alliance in order to strengthen his political base in Bihar.

Tejashwi Yadav has been banking on the Muslim-Yadav (M-Y) combination floated by his father and RJD chief Lalu Yadav in the 1990s. He has also been targeting Mahadalits.

But, political observers say that the scenario has changed and the RJD-Congress combine has been trying to rope in other secular parties into the Mahagathbandhan fold.

“There are others in the Mahagathbandhan who also want a respectable number of seats for 2019 general elections. Mr Manjhi’s demand for a larger number of seats may cause uneasiness among the allies,” a source in Congress party said.

Reports suggest that Begusarai seat has already been earmarked by the CPI for former JNUSU president Kanhaiya Kumar. Sources familiar with the development also claimed that the RJD has agreed to vacate the seat for Kanhaiya Kumar but has decided to make an announcement regarding the issue after seat-adjustments are finalised with other coalition partners.

Senior NCP leader D.P. Tripathi’s meeting with RJD chief Lalu Yadav has also created a flutter in the political circle. Speculation is rife that the RJD may also offer a “respectable number of seats” to the NCP in 2019.

“Lalu Yadav has been trying to stitch an alliance with secular parties to strengthen Mahagathbandhan in the country. I discussed political issues during our meeting,” Mr Tripathi told reporters after meeting Lalu Yadav in Ranchi last week.

The RJD chief, who is serving jail term in fodder scam cases, is being treated for various ailments in a Ranchi hospital.

Sources said that as per the earlier plan the RJD being the largest party in Bihar Assembly may keep a maximum share of Lok Sabha seats, out of the 40, for itself. The Congress may get 10 seats while other coalition partners like the HAM and others, including Left parties, may be asked to contest on the remaining number of seats.

There is also a buzz that the Congress is seeking more seats claiming that its support base has increased in the state after 2015 Assembly elections.