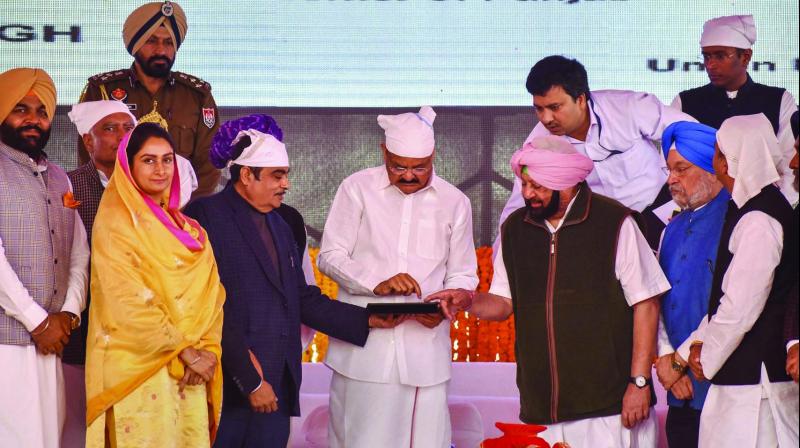 Gurdaspur/Chandigarh: Calling it a historic day and “beginning of a new chapter” in bilateral ties with Pakistan, vice-president M. Venkaiah Naidu on Monday laid the foundation stone of Kartarpur corridor at Gurdaspur in Punjab, which will facilitate passage of Sikh pilgrims from India to visiting the 16th-century Gurdwara Darbar Sahib in Pakistan, while Punjab chief minister Captain Amarinder Singh used the occasion to hit out at Pakistan Army Chief General Qamar Javed Bajwa for terror activities in the state and killings of Indian soldiers on the border.

Speaking at the foundation stone laying ceremony, Capt. Amarinder Singh, who  declined an invite to travel to Pakistan for their ground-breaking ceremony of Kartarpur corridor on Wednesday, asked Pakistan Prime Minister Imran Khan to rein in his Army and end terror against Indian armed forces and citizens.

Referring to the November 18 Amritsar grenade attack on Nirankari Bhavan in which three people were killed and over 20 people injured, the chief minister lashed out at Pakistan saying, “What do they get out of firing bullets at innocent people and killing them with grenade… they should be ashamed of themselves.”

“If they try to foment trouble in Punjab then Bajwa (Pak Army chief) should remember that we have Punjabi blood, we will not tolerate it,” he said.

The chief minister, a former Army officer, said, “As a soldier, I would like to ask Pakistan Army Chief Qamar Bajwa something. Which Army teaches to violate ceasefire and kill jawans on the other side? Which Army teaches to send people to attack Pathankot and Amritsar? This is cowardice. I am warning you (Pakistan Army Chief Qamar Bajwa), we are also Punjabis, you will not be allowed to enter here and vitiate the atmosphere.”

“We believe in peace and we are giving a message of peace from here. But, their generals should understand that we have a large Army and we are prepared ...  And this should not happen as nobody wants war. We all want to carry out development in a peaceful manner,” said Capt. Amarinder Singh.

Lashing out at those who felt he should have accepted Pakistan’s invitation to participate in Pakistan’s Kartarpur corridor ceremony on Wednesday, Capt. Amarinder Singh said how can he visit Pakistan when innocent Indian citizens and soldiers are being killed by it everyday.

The chief minister suggested that there should be relaxed visa provisions for pilgrims travelling via the corridor to visit the historic gurdwara in Pakistan.

Earlier, Mr Naidu hailed the corridor work on both sides of the border as the “beginning of a new chapter” in India-Pakistan ties, but also made a veiled reference to Pakistan-sponsored terrorism.

“India never attacked any country. We want good relations with our neighbours. It is unfortunate that some people make terrorism their policy. We cannot tolerate terrorism and killing of innocent people on our soil,” Mr Naidu said.

Union highways minister Nitin Gadkari also addressed the gathering during the ceremony and assured the completion of the corridor within four months.

Dera Baba Nanak Sahib and Kartarpur Sahib, in Pakistan, are twin pilgrimage places associated with Sri Guru Nanak Devji. At Kartarpur Sahib he lived preaching for 18 years and the Gurdwara Darbar Sahib is built his commemoration

The gurdwara, on the banks of the Ravi, has historical significance for Sikhs as Guru Nanak Dev, the founder of Sikhism, spent 18 years there. Established by the Sikh Guru in 1522, it is about three-four km from the International Border. The opening a corridor to the historical shrine was a long-pending demand of Sikhs.

The proposal to open the passage for Sikh pilgrims comes at a time when India-Pakistan ties have nose dived and all bilateral engagements postponed following a number of terror attacks by Pakistan-based groups since 2016, including on Pathankot Air Force Station.

The ceremony also had its share of controversy, when a state minister and local legislator objected to the names of former Punjab chief minister Parkash Singh Badal and his son Sukhbir Singh Badal engraved on the foundation stone.

To protest the inclusion of rival Akali leader’s name, minister Sukhjinder Singh Randhawa put black tape on the name of chief minister on the plaque.

“It is not a political function. It is a government function, and I told them their (Badals) names should not be there,” said Mr Randhawa.

After the protest, that foundation stone was replaced. Visuals of the foundation stone on the screen, when it was being laid digitally, carried the names of the vice president, the Punjab governor, the chief minister and the Union highways minister.