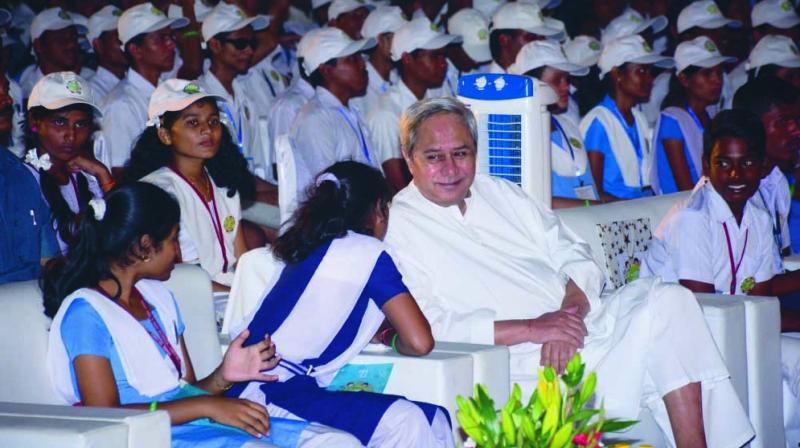 Bhubaneswar: Intimidated by the BJP's big push to consolidate its vote bank Odisha, the Naveen Patnaik-led Biju Janata Dal (BJD) is trying hard to consolidate its position ahead of the 2019 Assembly polls among different classes of voters like workers, slum dwellers and other marginalised sections.

The apparent shift of the lower-middle class, middle-class people and intellectuals towards the BJP - a fact that was proved by the saffron party's success in the rural polls early this year - has come as a strong warning to  the BJD, forcing its strategists to redraft their plans to regain foothold among these sections.

In the last couple of months, chief minister Naveen Patnaik has announced nearly half-a-dozen of new programmes and schemes to woo voters.

In latest of its schemes, the regional party has announced to hike the monthly remuneration of nearly 70,000 Anganwadi workers.

What is quite noteworthy is that the BJD has brought half of the Anganwadi workers under its newly-floated trade union Biju Shramik Sangathan (BSS), headed by party secretary Subash Singh.

The new trade union BSS, as planned by the party, will enrol mining workers, construction workers and industrial workforce ostensibly to weaken the trade unions controlled by the BJP, Congress and the Left parties like CPI and CPI(M).

On August 9, Mr Patnaik a played a masterstroke by announcing land rights and affordable houses for slum dwellers residing in municipalities and Notified Area Councils (NACs) of the state. The state has over 3,000 slums with nearly 8,000 households. On an average, each household comprises five members with three adults. It implies that the party would directly touch around 2.40 lakh urban voters.

On October 13, the CM announced an assistance of Rs 500 per month to  patients with blood disorders towards their travel expenses for blood transfusion.  Over 10,000 patients suffering from thalassemia, haemophilia and sickle cell anaemia are likely to benefit from the scheme.

Mr Patnaik turned his focus on the Bijepur Assembly bypoll, whose schedule has not been announced by the EC, and announced Gangadhar Meher Lift Canal System, an underground pipeline based irrigation system, for the constituency. The project entails an investment of Rs 1,200 crore.

Knowing that his arch rival BJP has targeted him for his ignorance of Odisha's official language Odia - Mr Patnaik on November 14 announced a series of scholarships for students and also teachers excelling in use of mother tounge.

He also announced Rs 5000 scholarship each for 40,000 students for scoring good marks in High School Certificate (HSC) board examinations. Free uniforms and bicycles are already being given to school children under another scheme. It is reliably learnt that the state government will soon dole out free shoes to all the school-going children.

On October 25, the CM announced a drought assistance package for 15 districts where farmers sustained crop loss due to pest attack.

According to 2014 Election Commission of India statistical reports, Odisha has nearly 1.52 crore voters. In 2014 assembly elections, the Naveen Patnaik-led BJD which won 117 seats of 147 seats and formed the government for the fourth consecutive term, polled 93.34 lakh votes, a share of 43.4 per cent. The Congress had polled 55.35 lakh with a vote share of 25.7 per cent while the BJP had finished third with 38.74 lakh with 18 per cent vote share.

With BJP emerging second in the rural polls held in February, Mr Patnaik is apparently worried about retaining power for the fifth consecutive term. The BJP national president Amit Shah has  galvanized party machinery in all the 36,000 booths targeting 1.40 crore votes — 400 votes from each booth.