The comb becomes the pride possession of the girl for the rest of her life, even if their love does not end in their marriage. 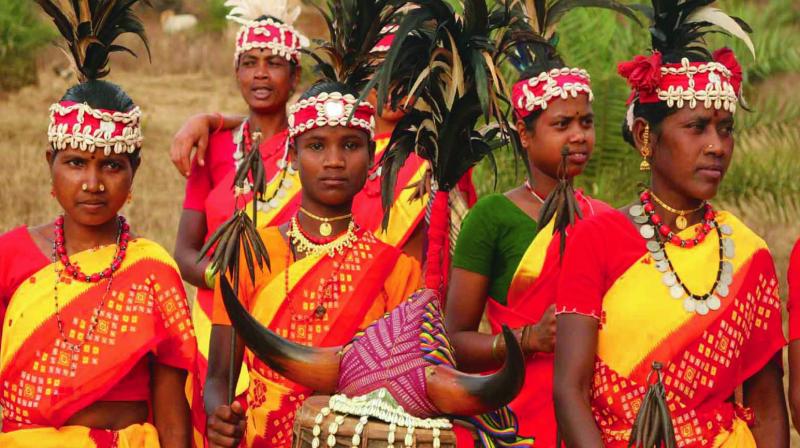 Bastar: When a Muria youth falls in love with a girl of his tribe, he creates symphony on a tiny piece of wood.

He burns  the midnight oil chiseling poetry of love on a comb to impress his sweetheart. His magical touch, filled with intense feelings for his love, transforms the mundane piece of wood into testimony of his love for her.

Cupid strikes the couple instantly when the Muria boy, called in his tribe's parlance as chelik, presents the intricately decorated comb, crafted with beautiful figurines such as a village belle lazily caressing her flowing hair, a bird in flight, three dots tracing a triangle etc... to her lady love, identified by his tribe as motiari.

The comb becomes the pride possession of the girl for the rest of her life, even if their love does not end in their marriage.

In keeping with a centuries-old tradition, unmarried Muria youths used to spend nights with single women of their choice at the local ghotul or dormitory, deemed as primary cultural institution of the tribe, to have fun. Thus the exquisite comb art, called among the tribals as "cupid's craft", was born.

Besides Muria, other tribe groups such as Maria, both sub-groups of Gond tribe residing in Chhattisgarh and Madhya Pradesh, and Bhils of Rajasthan have the tradition of crafting and wearing combs. The combs are made of teak and rose woods.

"The tradition of crafting and wearing the exquisite comb among the tribe has now become a thing of the past. The craft has virtually gone extinct as plastic combs in different vibrant hues have replaced wooden ones," said ethnologist and tribal art historian Niranjan Mahawar, 80, who authored over two dozen books including the widely acclaimed Bastar Bronze.

The Raipur-based art connoisseur has collected over 1,600 combs from different tribal cultural zones in the country, including Bastar, in Chhattisgarh. "Tribal boys no more perspire to craft intricately designed combs to woo their sweethearts as the girls appear to be attracted more towards colorful plastic combs, flooded in the market. The change in taste of the tribal girls, caused by advent of modernity, has sounded the death knell for the craft," he lamented.

Some combs crafted with figurines such as tortoise, elephants, birds and tigers, represents totems of the particular tribes.

Praneeta Sharma, professor of anthropology department in a Raipur-based college, said, "The virtual extinction of comb craft has threatened to bury the rich heritage of tribe groups along with a treasure trove of information on a civilization."