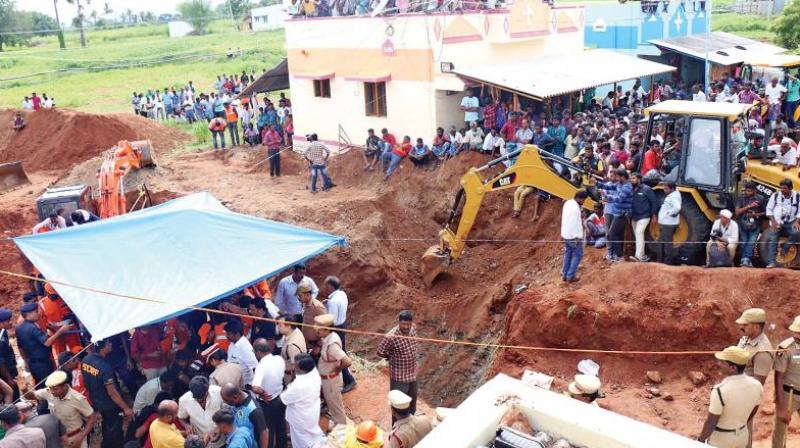 Tiruchy: Hopes of rescue receded as two-year-old Sujith Wilson slipped further to about 100 feet depth into the borewell in his father’s corn field at Nadukattupatti village near Manapparai near here even as multiple expert agencies and teams continued efforts to retrieve him for the second day on Saturday.

“Despite our best efforts and the hard work of various organisations, the boy could not be retrieved so far and has in fact slipped further to about 100 feet. He has not been responding to our calls and there is no sign of any movement in him since 5.30 this morning. He did respond with feeble ‘hmm’ noises even at 3.30 am, but has fallen silent since then. Also, mud has slipped from the walls of the narrow borewell walls and fallen on him”, Health Minister Dr C. Vijaya Baskar said. He has been camping at the mishap site since Friday evening, along with ministerial colleague Vellamandi Natarajan and senior officials to oversee the rescue operations.

After the failure of over six different expert teams coming from various parts of the state and elsewhere, along with their machines and innovative gadgets to rescue the kid, a group comprising the ONGC and NLC experts began work late Saturday night to dig a pit parallel to the borewell pipe and a little deeper than Sujith’s position at 100 ft. A volunteerfrom the state fire service has been drafted to don special outfit, including focus light and tunneling equipment, to drill a four-inch diameter tunnel to reach the boy.

“We first thought of digging the pit about one metre from the borewell but decided to do it three metres away to prevent caving in of the soft mud or the vibration if we hit a rock which could harm the kid and the borewell. These experts are experienced in doing such deep tunnels, such as the underground Metro Rail works”, said Minister Vijaya Baskar, adding that he hoped the boy would be reached by the brave fireman in about three hours.

But with Sujith already trapped for over 30 hours and has been slipping deeper into the borewell, the worst is feared. Also, earth had slipped on him and the head is believed to be covered with two inches of mud, officials overseeing the operation told this newspaper. “We are continuing to pump in oxygen but it is unlikely he is getting it as he is buried so deep and there is mud covering him,” said an officer. He said it was possible that the borewell could be much deeper and not covered as being claimed by the kid’s father.

Minister Vijaya Baskar also said the teams from the National Disaster Rescue Force and State Rescue Force tried for a couple of hours and decided to make way for the ONGC-NLC team late evening. There have been complaints that the government acted lethargic in not summoning the NDRF and the State Rescue Force much earlier.