In 2018, he celebrated the festival with Army and the ITBP personnel in the icy terrain near the India-China border in Uttarakhand. 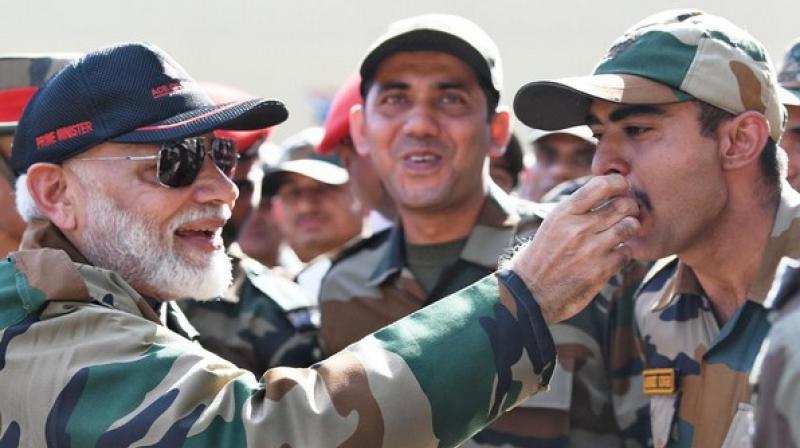 Hours before his death, he had greeted people on Diwali on his Twitter handle and Facebook page. (Photo: ANI)

Jammu: Prime Minister Narendra Modi, on Sunday, celebrated Diwali with the troops deployed in Jammu and Kashmir's border district of Rajouri and praised them for their valour, saying it enables the government to take decisions hitherto considered impossible.

Accompanied by Army Chief General Bipin Rawat, Modi flew to the Army Brigade Headquarters in Rajouri town just a few hours after the Pakistani army targeted forward posts in the district. The shelling from across the border was retaliated by the Indian army.

Wearing a combat jacket, PM Modi exchanged wishes and sweets during his nearly two-hour-long stay and interaction with the troops deployed along the LoC, officials said.

Addressing the 1,000-strong soldiers, PM Modi said, "The valour of the Indian defence forces made it possible for the central government to take decisions which were hitherto considered impossible."

He was apparently referring to India's preemptive air strike on a Jaish-e-Mohammad terror camp in Pakistan's Balakot on February 26 in response to the February 14 Pulwama terror attack in which 40 CRPF personnel were killed besides abrogation of Article 370 provisions.

He said everyone wants to celebrate Diwali with their family and so he too travelled to be with his family, which is the "brave jawans of the armed forces".

He visited the 'Hall of Fame' in Rajouri and paid homage to the soldiers and brave citizens who laid down their lives to protect Rajouri and Poonch sectors.

He termed the Hall of Fame as 'Parakram Bhoomi, Prerna Bhoomi, Paavan Bhoomi'.

Highlighting the courage and fortitude of the forces in safeguarding national security, PM Modi thanked them on behalf of the people of the country for their monumental service.

To pay homage to and mark their contributions, the government endeavoured to etch the landmark National War Memorial in Delhi, he said, adding the increasing number of visitors to the memorial shows the respect accorded by the citizens towards the contributions of armed forces.

Later in a series of tweets, PM Modi said, "Celebrated #Diwali with the brave soldiers of the Indian Army in Rajouri, Jammu and Kashmir. It is always a matter of great joy to be able to interact with these courageous personnel."

He also spoke about the steps the NDA government is taking for the welfare of soldiers. "While interacting with our soldiers, I thanked them on behalf of the people of India for their monumental service. Their vigilance and valour keeps our nation safe!"

In another tweet about his visit to the 'Hall of Fame', he said, "Anecdotes about the courage of our soldiers are widely shared but do you also know about the stupendous efforts of our armed forces during natural disasters? Their swift action saves many lives and prevents public property from being destroyed."

On his way back from Rajouri, PM Modi interacted with air warriors and personnel of the army at the Pathankot Air Force Station.

He also posted a short video, with a heading "#Diwali is sweeter when celebrated with our brave soldiers", in which he is seen offering sweets to the soldiers under a camouflaged tent. The soldiers then raised 'Bharat Mata ki jai' slogans.

The prime minister's visit to Rajouri coincided with Infantry Day celebrations, which is observed to mark the landing of the first Indian troops in Jammu and Kashmir in 1947 to push back Pakistan supported intruders.

This is the third time that PM Modi celebrated Diwali with troops in Jammu and Kashmir since 2014, and the first after the abrogation of Article 370 provisions.

The army personnel were ecstatic and said they feel proud about the prime minister's "surprise" visit.

"We never thought of the prime minister visiting us and making our Diwali a memorable one... It was a big surprise and we are feeling proud after meeting him," one of the soldiers said while leaving the venue after the departure of PM Modi.

Since becoming prime minister in 2014, PM Modi has interacted with troops serving in tough areas on Diwali. That year, he visited Siachen in Ladakh region and in 2015, he went to the Punjab border.

The next year, PM Modi was in Himachal Pradesh, where he spent time with Indo-Tibetan Border Police (ITBP) personnel at an outpost.

He visited Gurez sector of north Kashmir in 2017 and last year, he was with Army and ITBP personnel in the icy terrain near the India-China border in Uttarakhand.