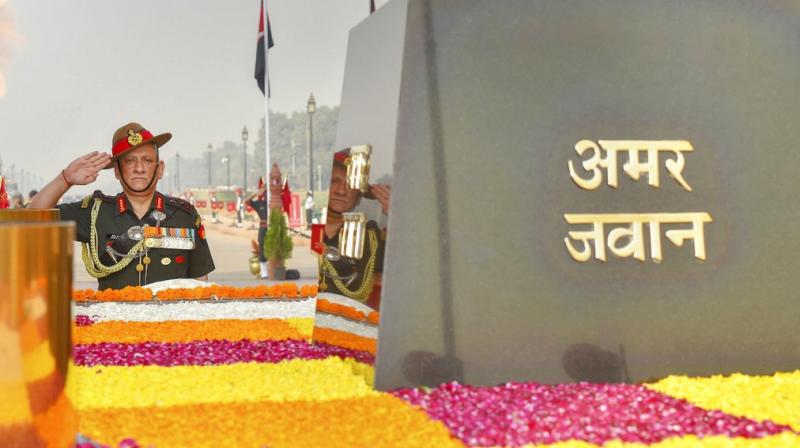 Chief of Army Staff, General Bipin Rawat pays homage to the Martyrs, on the occasion of Infantry Day, at the Amar Jawan Jyoti, India Gate in New Delhi. (Photo: PTI)

New Delhi: Army Chief General Bipin Rawat on Saturday said that Pakistan was using terror to keep the pot boiling in Jammu and Kashmir since it was well aware they could never succeed. Accusing the neighbouring country of trying to stall development in the state, Rawat warned that India was strong enough to counter Pakistan’s evil designs and fully capable of carrying out different operations.

“Pakistan is fully aware they can never succeed, terror is another way by them to keep the pot boiling. They want to stall development in Kashmir but Indian state is strong enough to counter everything, and we are fully capable of carrying out different operations,” Army chief Bipin Rawat said.

General Rawat made the remarks after paying tribute at the Amar Jawan Jyoti in the Delhi to mark Infantry Day.

General Rawat had articulated the need for another surgical strike on terror launch pads across the Line of Control twice in the past month.

The Army Chief, in September, emphasised the need to “avenge” the “barbaric” acts carried out by the Pakistani Army and terrorists against Indian soldiers, saying it was time to “give it back in the same coin”.

Speaking on the death of a 22-year-old soldier following a head injury in an incident of stone-pelting in Anantnag district of South Kashmir, Rawat said, “The Jawan who lost his life after being attacked by stone pelters was guarding a border roads team which was constructing roads, and then we have some people saying don't treat stone pelters like OGWs (over ground workers) of terrorists.”