Yogi Adityanath, on first visit to Taj Mahal, calls it a ‘gem of India’

Several of his ministerial colleagues, including state tourism minister Rita Bahuguna Joshi, accompanied Yogi Adityanath on his visit to the Taj. 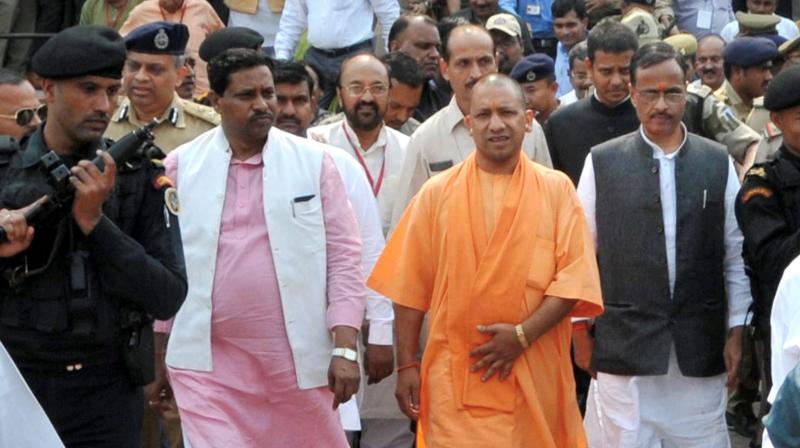 UP Chief Minister Yogi Adityanath and tourists during a visit to the Taj Mahal in Agra. (Photo: PTI)

Lucknow/Agra: In a clear effort to set at rest all controversies over the Taj Mahal, Uttar Pradesh chief minister on Thursday swept the road outside the Taj and went inside the Mughal-era monument, considered one of the seven wonders of the modern world, and described it as a “gem of India” and an integral part of Indian culture.

The much-publicised visit, the first by a BJP chief minister of UP, comes days after the party’s leaders and ministers made provocative statements against the famed symbol of love. The chief minister said it was important to not focus on why the Taj Mahal was built or how it was built, but to remember that the blood of Indian labourers had contributed to its construction.

The CM was in Agra on Thursday and spent around 45 minutes at the Taj. He entered from the west gate and exited from the east gate, going straight for a presentation by the Archaeological Survey of India. This was his first visit to the Taj Mahal. When he was in Agra in May, he left the Taj out of his itinerary.

Several of his ministerial colleagues, including state tourism minister Rita Bahuguna Joshi, accompanied Yogi Adityanath on his visit to the Taj.

The chief minister launched a cleanliness drive near the west gate of the Taj, where he was greeted with chants of Vande Mataram. He said his government was committed to the conservation of the 17th century monument built by Mughal emperor Shah Jahan in memory of his wife Mumtaz Mahal. He also visited the Mughal Museum. The media was not allowed to go inside the Taj during the CM’s visit.

Later, speaking at an event in Agra, Yogi Adityanath highlighted his government’s development initiatives for Agra, and tore into earlier governments, accusing them of practising divisive politics. He said his government’s efforts were not aimed at benefiting any caste or religion, but the entire state. “People who are raising questions over my Agra visit are the ones who have divided society on the basis of caste”, he said.

He said the security of tourists would be ensured and that those responsible for the attack on a Swiss couple at Fatehpur Sikri a few days ago would be severely punished. The state government was considering a proposal to set up a tourism police force, he said.

The CM’s decision to visit the Taj was announced after a series of controversies, beginning with a UP tourism department booklet not mentioning the white marble monument in its list of development projects in the state. Subsequently, BJP MLA Sangeet Som said history would be rewritten to erase the Taj from it and BJP MP Vinay Katiyar said it was originally a Shiva temple.

But Yogi Adityanath sought to quell the controversy during a rally in Gorakhpur and again on Thursday. “We should not delve deeper into the details of why, when and how the Taj Mahal was built. What is important is that it was built by the wealth and hard work of India’s farmers and labourers,” he said at a rally in Agra.

“The Taj Mahal is India’s gem and a gift to the world. It attracts lakhs of tourists. It gives Agra recognition and creates employment opportunities,” he added.

In a conversation with reporters later, he added that the Taj Mahal was an integral part of India’s culture and that his government was committed to its conservation. This was a significant departure from his remarks at a rally in Bihar last year, when he had said it does not represent Indian culture and that foreign dignitaries should be presented with the Gita rather than Taj Mahal replicas.

Unprecedented security arrangements were made in Agra for the CM’s eight-hour visit. Over 14,000 policemen were deployed across the city and four helipads set up in various parts of the city for his helicopter to land.