India   All India  27 Oct 2017  Sherin Mathews was adapting to new home, had eating issues: US adoption agency
India, All India

Sherin Mathews was adapting to new home, had eating issues: US adoption agency

Reports describe her progress and repeatedly mention she was 'adjusting well' in her new home and appeared to be 'secure and comfortable'. 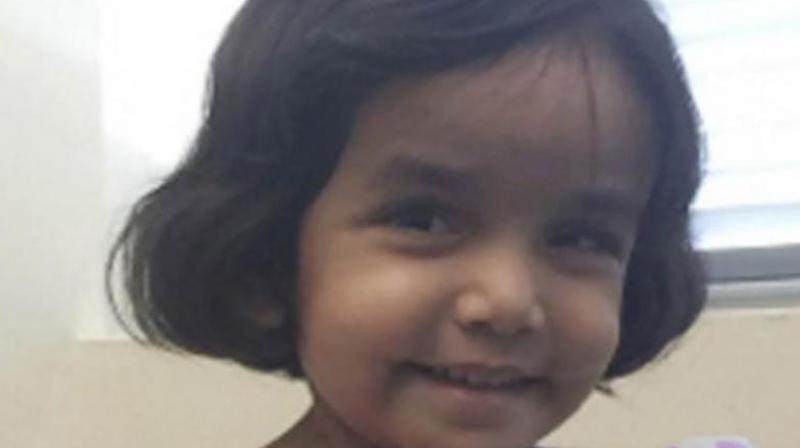 Sherin Mathews had gone missing on October 7 and the police in the Texan city of Richardson had earlier this week confirmed her death after over a fortnight of searches. (Photo: AFP | File)

New Delhi: Sherin Mathews, the three-year-old Indian girl whose adoptive father claimed that she choked while drinking milk, was "adjusting well" at her new home in the US but feeding her was becoming a challenge, according to reports submitted to the nodal adoption agency in India.

The authorised foreign adoption agency which was overseeing her case in the US, Holt International, submitted four follow-up reports to the Child Adoption Resource Authority (CARA) in India since her adoption on July 8, 2016.

These reports describe her progress and repeatedly mention she was "adjusting well" in her new home and appeared to be "secure and comfortable" in her the surroundings.

The reports also describe her as a child with "pleasant disposition", someone who "was more stoic when we first met but her personality is starting to develop and she is more animated now".

One of the reports quotes her mother as saying that the child was "perfect for the family".

However, these assessments also note that she displayed "eating concerns".

Sherin had gone missing on October 7 and the police in the Texan city of Richardson had earlier this week confirmed her death after over a fortnight of searches.

Her father Wesley Mathews, 37, was re-arrested on Monday and charged with first-degree felony injury to a child due to a conflicting statements to police.

He was earlier arrested for suspected child endangerment for the treatment of his daughter. He was released on bond.

The social worker who visited Sherin Mathew's family for follow-ups records that "eating has become more and more challenging for the family". "She likes to eat food outside but not at home".

The fourth, and the last report before Sherin's death, notes, "We discussed several different strategies that may be helpful" and that "additional mealtime strategies are needed to break this cycle and avoid more serious long term eating concerns".

The social worker also recommended "webinars and other resource for feeding issues in adopted children that may be helpful in developing different strategies for Saraswati's (as she was known before her adoption) feeding concerns".

According to CARA CEO Lt Col (retd) Deepak Kumar, "The child was undernourished right from the time she was adopted. She weighed less for a girl her age. There were concerns about her eating habits and her parents wanted to look into that."

Her father also told the police the girl was malnourished when she was adopted and needed to eat whenever she was awake to help her gain weight. Sherin was about three-feet tall and weighed just 22 pounds (10 kgs).

The girl was born on July 14, 2014 and was surrendered by a parent in Gaya, Bihar. She was sent to an orphanage, Nalanda Mother Teresa Anaath Seva Ashram, which is now shut, the CARA CEO added.

He also said that due procedures of law were followed during the adoption of the child and the adoption agency in the US the case submitted timely and detailed reports.

"Apart from Sherin's eating habits, there were no concerns. The post-adoption follow up was carried out properly," he said.

There are certain commitments which a receiving country and a sending country have to give as per the Hague Convention and in this case the US has been fulfilling those requirements, he added.

"There can be aberrations but that doesn't mean there is anything faulty in the system."

He said the reports submitted to the CARA were detailed and spread over 5-6 pages, each of them carrying 4-5 photos of the child.

The four reports submitted recorded the girl's one-month, three-month, half-yearly and annual progress after she was placed with the adoptive family in the US.

Each of these reports were notarised by the state of Texas.

Kumar said that the authorised foreign adoption agency had the recognition of the nodal body for adoption there - the US Central Authority for Hague Adoption.

The agency was also accredited under the Hague Convention and was vetted by the Indian Embassy in the US.

The submissions also describe how Sherin went on holidays with her extended family in Houston and spent some time in Dallas. The photos in the fourth report also show her cutting a cake at a party.

Her adoptive parents are overseas citizens of India.

The nationality by birth of the father, Wesley Mathews, is Qatari and that of the mother, Sini Mathews, is UAE. They are both US citizens.