The Calcutta HC had stayed the withdrawal of CAPF till October 27 after the state government approached it against the Centre’s decision. 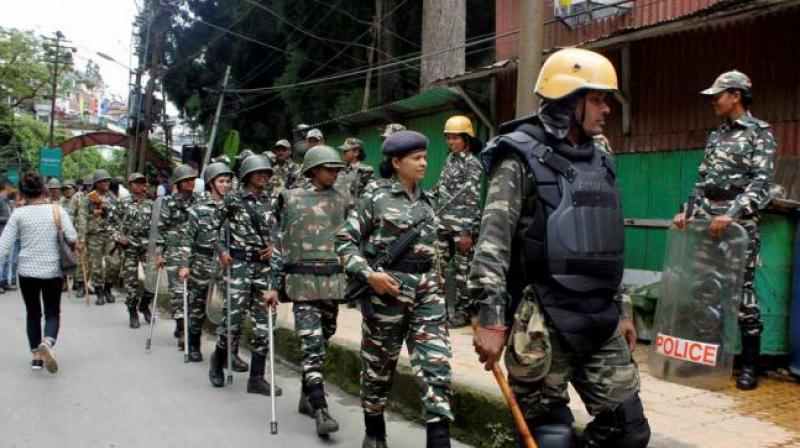 The court has now fixed the appeal of the Centre for further hearing on November 27. (Photo: PTI)

New Delhi: The Supreme Court on Friday allowed the Centre to withdraw seven of the 15 companies of Central Armed Paramilitary Forces (CAPF) from strife-torn Darjeeling and Kalimpong districts of West Bengal for being used for election duties in Himachal Pradesh and Gujarat.

A bench, headed by Chief Justice Dipak Misra, asked West Bengal government to respond within a week to the Centre’s appeal against the Calcutta High Court order directing it to allow all 15 companies of paramilitary forces to remain in the state.

The bench, which also comprised Justices AM Khanwilkar and DY Chandrachud, stayed the pending proceedings before the Calcutta High Court saying it will deal with the case “in a holistic manner”.

The court has now fixed the appeal of the Centre for further hearing on November 27.

The Calcutta High Court had stayed the withdrawal of CAPF from the Darjeeling hills, the scene of unrest over the statehood demand, till October 27 after the state government approached it against the Centre’s decision.

The high court had on July 14 directed the Centre to deploy four more companies of CAPF in addition to the 11 that was already present in the hills then.

The West Bengal government had written to the Centre seeking extended deployment of CAPF till December 25, but was told that of the 15 companies present, 10 would be withdrawn on October 15 and the rest by October 20.