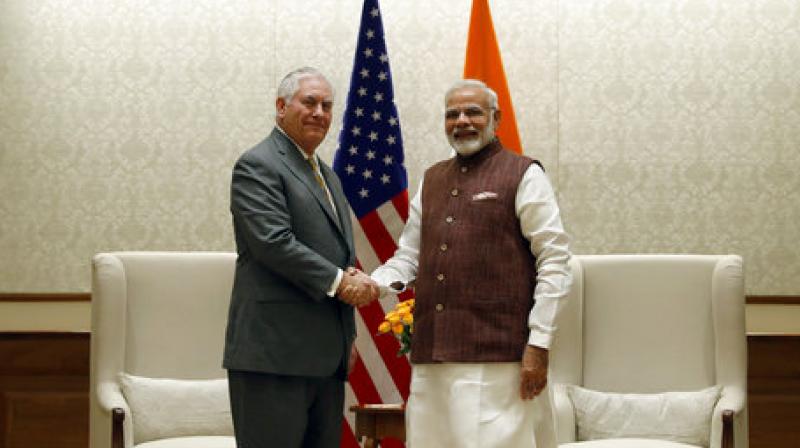 US secretary of state Rex Tillerson, left, shakes hands with Prime Minister Narendra Modi before their meeting at the Prime Minister’s residence in New Delhi earlier this week. (Photo: AP)

Few relationships in the world have witnessed such a sea change for the better in less than 50 years as have India-US relations. Remember 1971 when India had nearly 11 million refugees from East Pakistan on its soil; the Pakistani Army was committing a genocide against its own brethren and the US, regrettably, instead of raising voice against grave violations of human rights and siding with India — a multi-racial, multi-ethnic, multi-religious, multi-lingual, pluralistic and vibrant democracy — chose to intimidate it by moving its Seventh Fleet to Bay of Bengal. Thanks to the blind support to Pakistani dictatorship by US President Richard Nixon and secretary of state Henry Kissinger, bête noire of Indian Prime Minister Indira Gandhi. Bilateral trade was worth less than $100 million; the US wasn’t prepared to sell any military hardware nor supercomputers to India; India was supposed to be too close to the Soviet Union for American comfort. And following India’s nuclear tests carried out in May 1998, without letting the famed CIA even hear a whisper, the US imposed the severest regime of sanctions prohibiting any kind of cooperation between the scientific institutions and scientists of the two countries. India-US relations had touched nadir.

Today the US is India’s largest single country trading partner in goods; bilateral trade has crossed $115 billion; the US has sold defence products valued at around $15 billion in the last five years; both countries have carried out over 300 joint military exercises, the last Malabar exercise in which the Japanese Navy also participated created considerable concern and consternation in China, more than 70 missions explore and seek cooperation in every possible area under the sun and more than one million Indians visit the US annually.

Since Prime Minister Atal Behari Vajpayee described India and the US as “natural partners” in 2000, there has been “firm trajectory in the bilateral strategic partnership” as reflected in increasingly positive references to India by the US administration — “strategic partner” and “major defence partner”. On the Indian side, Prime Minister Narendra Modi has pronounced more than once that “the US is indispensable” for India’s progress in all sectors.

What US secretary of state Rex Tillerson said in his address at CSIS in Washington on October 18 while defining America’s relationship with India for the next century and what he said in Pakistan during his five-hour long stopover and what he articulated in his talks with foreign minister Sushma Swaraj and Mr Modi and at the joint press conference on October 25 would have been music to Indian ears.

But isn’t it déjà vu? Mr Tillerson’s CSIS speech was the most positive ever. But didn’t former US President Barack Obama, while hosting Manmohan Singh at the White House in August 2009, called India-US relations as one of the defining partnerships of the 21st century? Didn’t secretary of state Hillary Clinton’s remarks on India and the US, a vision for the 21st century, made in Chennai in July 2011, sound equally positive? During his visit, Ms Clinton talked of creating a structure with India to promote democracy. Fast forward: signing of the civil nuclear deal in 2008 was a watershed in Indo-US relations. And by signing LEMOA India had overcome the hesitation of history. Both President Bush and Obama had welcomed India’s emergence as a major power and considered it as a positive factor for regional stability. The “US-India Joint Strategic Vision for Asia-Pacific and Indian Ocean Region” announced jointly by Mr Obama and Mr Modi in Delhi in January 2015 seems to have been sharpened by the Trump administration. The joint statement during Mr Obama’s second visit to India in January 2015 talked of disrupting and dismantling terror infrastructure and also called for strict adherence to international laws for keeping South China Sea open for international trade and commerce.

So what’s new? The unambiguous declaration to “stand shoulder to shoulder with India”, to fight terrorism and telling the Pakistani leadership without mincing words that far too many terror groups find safe haven in their country and mount attacks on other countries and threaten the stability of the Pakistani government and warning that these safe havens will not be tolerated. It is to be seen if the Trump administration will go beyond putting pressure and take out terror infrastructure through direct intervention.

Assuring to “contribute to Indian capabilities to provide security throughout the region” and offering to “provide best technology to India for the modernisation of its military”. Obviously, Mr Tillerson tried to hard sell F-16 and F18. India is believed to be keeping its options open, rightly so.

Clearly signalling to China where American strategic convergence lies, at his CSIS speech Mr Tillerson brought it to the fore: “China while rising alongside India, has done so less responsibly, at times, undermining the international rule based order... India needs a reliable partner on the world stage... with our shared values and vision for global stability, peace and prosperity, the US is that partner.” No American leader has serenaded so passionately to woo India.

To her credit Ms Swaraj stood her guns firmly. No action against DPRK beyond observance of UN sanctions. Telling Mr Tillerson that Donald Trump’s strategy to fight terrorism and bringing about stability in Afghanistan will not succeed unless terror infrastructure is eliminated from Pakistan. Reminding him of the enormous contribution made to the US economy by Indian IT experts who arrive in the US on non-immigrant H1b visas — an argument which finance minister Arun Jaitley also stressed on in his discussion in the US. She is believed to have sought clarity about the legal framework for bilateral undertakings as major defence partners and flagged long-pending issue of totalisation.

Mr Tillerson wants to define relationship for 100 years. Welcome! Isn’t that’s too far? Let’s see how India-US relations shape under President Trump. They look sanguine. They have huge potential to expand further. Both Mr Modi and Mr Trump seem committed to see it happen. But the positivity emanating from words must get translated into concrete actions on the ground. Who knows, Mr Trump accused of causing so much of disruption at home and abroad might, as mentioned by former Senator Larry Pressler in Delhi recently, turns out to be the best US President for India.

The joint hosting of Global Entrepreneurship Summit in Hyderabad towards the end of November at which Ivanka Trump, daughter of President Trump will be leading the delegation, offers another opportunity to deepen India-US relations. We must take full advantage of it.