Verma was picked at 3:30 am from Mahagun Mansion Apartments, Indirapuram by a team of Chhattisgarh Police. 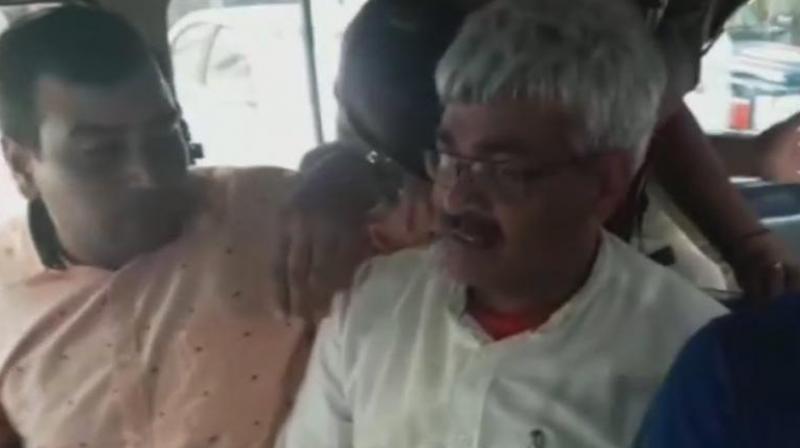 Verma has been booked under the Information Technology (IT) Act. (Photo: ANI/Twitter)

Ghaziabad/Raipur: Senior journalist Vinod Verma was sent on transit remand on Friday after being arrested on charges of extortion and blackmailing. Verma will now be produced before a Chhattisgarh court by the police.

Verma was picked at 3:30 am from Mahagun Mansion Apartments, Vaibhav Khand, Indirapuram by a team of Chhattisgarh Police with the help of Ghaziabad police, Senior Superintendent of Police (SSP) HN Singh said.

Verma, who earlier worked with BBC Hindi service and Amar Ujala, told the police, "I have a sex CD of a Chhattisgarh Minister, he is Rajesh Munat and that is why Chhattisgarh government is not happy with me".

Asked to comment on accusations that he was making CDs, Verma told journalists while being taken from the Indirapuram Police Station to court, "just pen drive... nothing else. I have nothing to with CDs. CD is in the public domain."

Verma has been booked under the Information Technology (IT) Act.

The complainant, police said, was a man named Prakash Bajaj.

"He had lodged a complaint at the Pandri police station that he was being harassed over phone by an unidentified caller who told him that he had a CD of his master," Raipur DSP Sanjeev Shukla said.

Bajaj had told police that the caller threatened to distribute the CD if he was not given what he asked for, Shukla said.

He said search teams were sent to Delhi to trace the scribe.

"During the probe, the police came to know about a shop where the CD in question was copied. The shopkeeper told the police that one Vinod Verma had got 1,000 copies made of the CD," Shukla said.

They then contacted their Ghaziabad counterparts and arrested the scribe from his house, and recovered the CDs and other material, he said.

As news of the arrest spread, many senior journalists from the electronic and print media gathered outside the Ghaziabad police station.

AAP leader and former journalist Ashutosh termed the development an "attack on the press".

In a tweet tagging the Uttar Pradesh Police, the journalist-turned-politician said Verma was arrested in a "mysterious" way and that the move amounted to attack on press freedom.