Modi said learning from books was okay but they must also be alert and attentive to the people around them whom they are meant to serve. 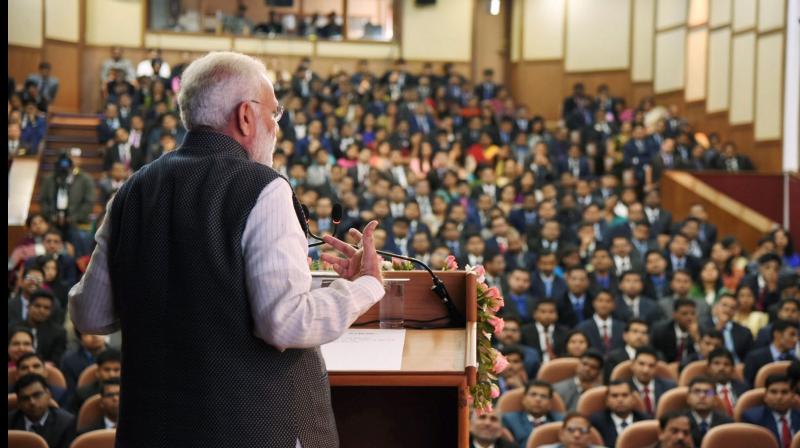 Mussoorie: Prime Minister Narendra Modi on Friday asked trainee officers of the civil services to look beyond books and develop the ability of connecting with people to serve them better.

He gave the tips to the officer trainees of the 92nd Foundation Course at the prestigious Lal Bahadur Shastri National Academy of Administration (LBSNAA) during an address in Mussoorie.

Modi said learning from books was okay but they must also be alert and attentive to the people around them whom they are meant to serve.

He said learning from books would surely prevent them from straying and taking the wrong path but it is the connect and rapport they establish with their teams and people that will help them become successful as officers, according to a PMO statement.

Underlining the importance of public participation for policy initiatives to be successfully implemented, the prime minister said that before Independence, the civil services were tasked with the objective of preserving the British Raj.

But now the objective of the civil services is the prosperity and well-being of the people, he told the young IAS officers and added tha tif civil servants imbibe these objectives, the gap between government machinery and the people can be bridged.

Modi also told them that the problem of silos and lack of team spirit among civil servants can be effectively tackled during the initial training at Mussoorie, the statement said.

Referring to the trek performed by officer trainnees during the foundation course, he asked them to imbibe the learnings of the trek, such as team spirit and leadership, and apply them throughout their careers.

He said social movements can drive change in a democracy, and the civil services should serve as catalysts for it.

Referring to the devotional song "Vaishnav Jan", performed by officer trainees during the cultural programme presented before him yesterday, Modi said they should contemplate on the lyrics of this song, after replacing the words "Vaishnav Jan" with "Civil Servant".

Describing anonymity as the biggest strength of the civil servant, he compared the civil services to the fourth lion of the Ashoka Emblem, which remains invisible, yet makes its presence felt at all times, the PMO statement added.

The prime minister urged the officer trainees to tour the field areas, during their postings.

The "sense of career", which had successfully brought the officer trainees to LBSNAA, should now be replaced by a "sense of mission" - to serve the people of India, he said.

"This should be your purpose of life when you serve in the field," he told the young civil servants.

The officer trainees belong to 17 civil services of India and 3 services from the Royal Bhutan Civil Service.

The address was preceded by presentations made by the officer trainees on essays written by them on the subject "Why I joined the Civil Services"; and on themes such as housing, education, integrated transport systems, malnutrition, solid waste management, skill development, digital transactions, Ek Bharat - Shreshtha Bharat, and New India - 2022.

The officer trainees also presented the best of their ideation on the Swachh Bharat Mission, the statement said.

Complimenting them on the presentations, the prime minister said he has given instructions that these be studied in depth by senior officers of the Government of India.

He said their observations and feedback should be shared with the officer trainees before the end of the Foundation Course.

Earlier this morning, the prime minister participated in the Yoga session of the officer trainees, held in the lawns of the Academy, in the backdrop of the Himalayas.

He also unveiled plaques to mark the laying of foundation stone of the new hostel building, and a 200 metre multifunctional synthetic athletic track.

The prime minister visited the Balwadi at the Academy and interacted with the children.

He also visited the gymnasium and other facilities at the Academy.

Later, the prime minister, who had arrived here last evening, was given a warm send-off at the Jollygarnt airport in Dehradun by Governor K K Paul and Chief Minister Trivendra Singh Rawat besides a host of BJP leaders as he left for Delhi.

Modi also spent about 20 minutes on his way back at the airport guest house in Dehradun with the governor and the chief minister during which he is understood to have discussed how to prioritise and fast-track the implementation of reconstruction projects worth Rs 700 crore at Kedarnath whose foundation stones he laid during his last visit to the state on October 20.