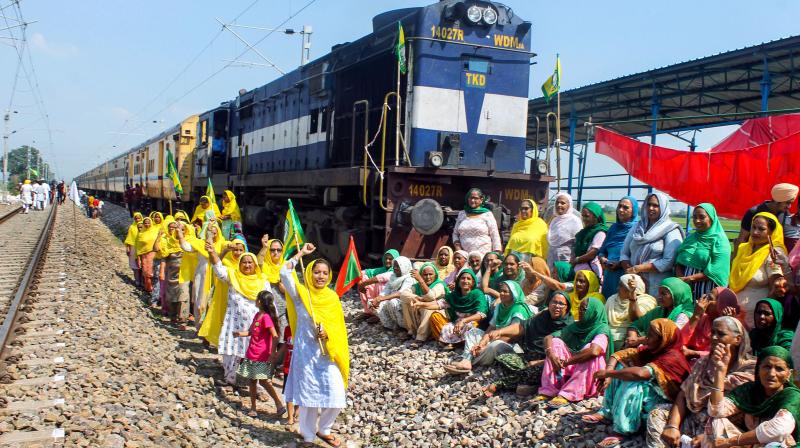 NEW DELHI: Normal life was hit in several states on Monday as farmers blocked highways and squatted on railway tracks at many places in response to the Bharat Bandh called against the three contentious agriculture laws that the government is refusing to roll back.

The shutdown, called by the Samyukta Kisan Morcha (SKM), an umbrella body of over 40 farm unions spearheading the agitation against the new laws, left thousands stranded for hours across India, particularly in the northern belt of the country. The farmers’ unions have been protesting for about 10 months at Delhi borders against the new laws which were cleared by the President a year ago.

Bharatiya Kisan Union (BKU) leader Rakesh Tikait said protesting farmers were ready for talks with the government, “but no discussions are happening. The solution to the ongoing protests against the new agriculture laws can be achieved through dialogue and not in the courts of law.”

Mr Tikait, who has become the face of the agitation, said the farmers’ stir was not only against the three laws and for legal guarantee on the Minimum Support Price (MSP) for crops but also against privatisation of agriculture. “I don’t know what is going to be the end of this protest but the movement has begun and the country’s youth, who often remained away from discussion on farming-related issues, is also joining it.”

The bandh, supported by several Opposition parties, began at 6 am with farmers hitting the roads in protest against the agri laws. The parties supporting the bandh included the Congress, the Aam Aadmi Party, Samajwadi Party, Telugu Desam, the Bahujan Samaj Party, Left parties and Swaraj India.

Expressing support for the farmers, Congress leader Rahul Gandhi said their non-violent "satyagraha" is still resolute but the "exploitative" government does not like this and that is why a Bharat Bandh has been called.

The maximum impact of the bandh was witnessed in Punjab and Haryana where farmers blocked national highways, state highways, link road and railway tracks. There were protests at several places in western UP and Rajasthan also.

The shutdown was almost complete in Punjab where transport services remained suspended during the entire bandh period. Even shops and other commercial establishments remained closed at most places in the state.

Ferozepur's divisional railway manager Seema Sharma said some passenger trains were cancelled while some others were rescheduled.

In West Bengal, Left activists blocked roads and railway tracks, but normal life remained largely unaffected in the state. Markets and shops remained open as usual, while public transport operated normally except for a few hitches.
In Jharkhand, protesters disrupted vehicular traffic at several places. Shops also remained shut in Ranchi, while government offices and banks functioned as usual. Farmers took out rallies on the major roads and held meetings in the state.

Public transport was also hit in Kerala where the bandh was supported by the ruling LDF and the Opposition Congress-led UDF. KSRTC bus services were off the road with almost all trade unions in the state taking part. People who had to travel opted for private modes of transport while others stayed home.

In Karnataka, the shutdown did not have any major impact in the initial few hours with all businesses and establishments functioning normally and transport services available. However, farmers' attempts to organise a Rasta Roko at major national and state highways led to disruption in vehicular movement in several parts of the state, especially in Bengaluru.

Demonstrations and rallies were also held across Jammu district led by CPI(M) leader M.Y. Tarigami. Hundreds of activists and farmers took out a rally and sat on dharna on the main road in Jammu, leading to disruption of traffic. Addressing the activists, he said the three "anti-farmer" laws are bound to "destroy" the agriculture sector and threaten India's food security.

The bandh, however, elicited mixed response in Maharashtra, where symbolic protests were held at many places. The ruling Congress and NCP supported the bandh but the Shiv Sena remained non-committal. State NCP chief and water resources minister Jayant Patil participated in the protests organised by his party unit in Aurangabad. At a public meeting, Mr Patil led the workers wearing black badges to hold a symbolic protest.

Gujarat largely remained peaceful, though there were reports of highways being blocked briefly which affected traffic movement. Vehicular movement on a national highway connecting Surat and Mumbai was blocked in Kamrej for some time by protesters, who burnt  tyres on the arterial stretch. Later, police detained about 25 people and restored vehicular  movement.