India   All India  27 Sep 2017  UP orders inquiry into BHU violence
India, All India

UP orders inquiry into BHU violence

Mr Sharma accused the Opposition parties of trying to vitiate the academic atmosphere. 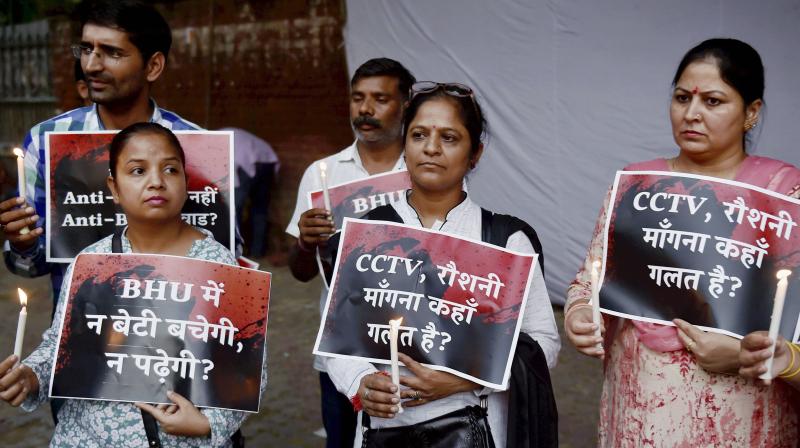 New Delhi/Lucknow: After the Opposition parties slammed the state government and BHU authorities for being “insensitive” towards girl students, university vice-chancellor Girish Chandra Tripathi said on Tuesday that an inquiry has been ordered into the violence in the university last week.

Mr Tripathi, who was in the national capital on Tuesday for the university’s executive council meeting, told reporters that he had recommended an inquiry headed by a retired high court judge. However, state government spokesperson and minister Srikant Sharma maintained a magisterial probe had been ordered.

The V-C, who was earlier criticised for saying that “if we listen to every girl we can’t run a university”, has come under pressure after Varanasi commissioner Nitin Gokaran, in a preliminary report submitted on Tuesday, concluded that the BHU authorities did not deal with the sexual harassment victim’s complaint in a sensitive manner and did not handle the situation on time.

Several students, including women, and two journalists were injured in a lathicharge on university students during a protest over an alleged eve-teasing incident on Saturday night.

The National Human Rights Commission (NHRC) has also sought an explanation from the university over the violence and the National Commission for Women (NCW) has cautioned Mr Tripathi to act as a responsible administrator and ensure safety and dignity of women on the campus.

The V-C has also been flayed by the Opposition parties for his alleged “RSS links”. There are reports stating that the V-C was associated with the RSS for the past four decades and is a close associate of RSS icon Pandit Madan Mohan Malaviya’s grandson, Justice (retd) Giridhar Malaviya, who was part of a panel which recommended Mr Tripathi’s name for the university’s top post.

The UP Congress has sought an all-party parliamentary probe into the violence and hit out at Prime Minister Narendra Modi  for not meeting the girl protestors during his Varanasi visit, saying “perhaps he does not know how to fulfil the duties of a father.”

Earlier, speaking to mediapersons after a meeting of the state Cabinet chaired by chief minister Yogi Adityanath in Lucknow, Mr Sharma had said that the chief minister had taken the matter “very seriously” and a “judicial inquiry” had been ordered.

He corrected himself later. “By mistake, I had said earlier that it will be a judicial inquiry. It is in fact a magisterial inquiry,” Mr Sharma clarified. He also said that the government had on its part ordered separate probes by the Varanasi commissioner and the additional director general of police.

Mr Tripathi said that he had been keeping Union human resource development minister Prakash Javadekar updated on the issue and submitted a report on Monday.

He claimed that the violence was fanned by “rumour mongering” and “outsiders”.

“We have the footage in which outsiders can be clearly seen at the protest. Rumour mongering escalated the protests. Rumours were spread that girls have been asked to vacate the hostels and those who were not involved in the protests also joined it,” he said.

As Opposition parties targeted the ruling BJP in UP over the police action against the girl students on the campus, Prime Minister Narendra Modi and BJP president Amit Shah on Monday spoke to Mr Adityanath and asked him to address the issue at the earliest.

Mr Sharma accused the Opposition parties of trying to vitiate the academic atmosphere.

“If they wish to do politics, they should do it with us and not with students. They should keep away from holding agitations on campuses,” he said.

The NHRC issued notices to the state government and BHU V-C on alleged inaction over eve-teasing complaint and harsh police action against students, asking for a detailed report within four weeks.

The NCW also cautioned the V-C. “The NCW while taking other statutory measures… expects the V-C, BHU, to act like a responsible administrative head, who ensures safety and dignity of women,” it said in a statement.

The Congress has demanded an inquiry into the lathicharge incident by an all-party parliamentary panel. State Congress chief Raj Babbar said, “There should be a credible probe by a team of MPs from all parties who should visit BHU and give a report to the central government as the university comes under its purview.”

“Our Prime Minister was in Varanasi when the students were staging a dharna and he should have come... At least walked up to them as they were like his daughters. Perhaps, he does not know how to fulfil the duties of a father,” he said.