The girls are dressed as brides and then 'their dresses are removed, virtually leaving them naked'. 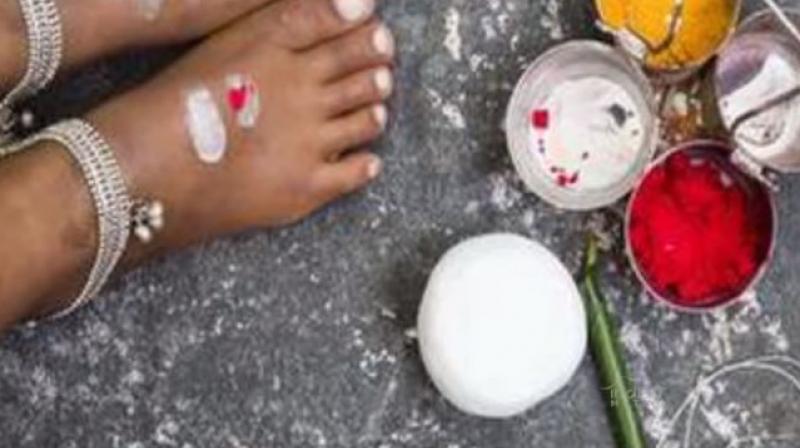 Practise in the southern states of Tamil Nadu and Andhra Pradesh and parts of western India, the devadasi system, which 'dedicates' girls to a life of sex work in the name of religion, continues despite being outlawed in 1988. (Photo: YouTube/Screengrab)

Chennai: The practice of keeping young girls in village temples to be worshipped as goddesses as part of rituals in south India amounts to abuse and slavery, the National Human Rights Commission said.

The rituals in which girls are dressed as brides and then “their dresses are removed, virtually leaving them naked” is a form of the banned devadasi system, the National Human Rights Commission said in a report published on Monday.

Practise in the southern states of Tamil Nadu and Andhra Pradesh and parts of western India, the devadasi system, which “dedicates” girls to a life of sex work in the name of religion, continues despite being outlawed in 1988.

“They are denied to live with their families and have education. They are forced to live in Mathamma temples, deemed to be ... public property and face sexual exploitation,” the commission said in a statement.

The report was referring to a 15-day festival in parts of Tamil Nadu, which concluded on Tuesday, where local goddesses are worshipped and seven young girls are chosen by the community to stay in the temple.

The state government has denied accusations of abuse.

“Our child protection team has visited the temple in question and parents are there to take care of the girls,” said K Veera Raghava Rao, the administrative head of Madurai district in Tamil Nadu.

“These are 200 year old traditions that are practised in many village temples across the region. We have not found any case of abuse and our officials are monitoring the functions. We have asked them to cover the girls with a shawl.”

But campaigners said that in the name of tradition, hundreds of girls between the ages of seven and 10 years are made to stay in the temple premises during the festivities.

These girls, or Mathammas as they are referred to in parts of Tamil Nadu, are then forbidden to marry and must earn their living by dancing at the Hindu temples.

In some cases young girls being initiated into the practice have to be bare-chested with only garlands and jewels covering them, while in others they are made to carry pots of liquor as part of the celebrations, child rights campaigners added.

“As you travel through the region, the names keep changing, but the fact is that women are being forced into prostitution in the name of rituals,” said Priyamvada Mohan Singh, a criminology professor who carried out a survey in 2016 on the devadasi tradition for the Indian government.

“The tradition exists in Tamil Nadu, Andhra Pradesh, Karnataka and Maharashtra. We have documented many cases during our research.”

The National Human Rights Commission said the practices violated the children’s rights and asked both the Tamil Nadu and Andhra Pradesh governments to respond in four weeks.