India   All India  27 Sep 2017  A ‘women-centric’ approach for gains in nutrition
India, All India

A ‘women-centric’ approach for gains in nutrition

On the one hand, there are states like Kerala and Goa which have a low burden of undernutrition. 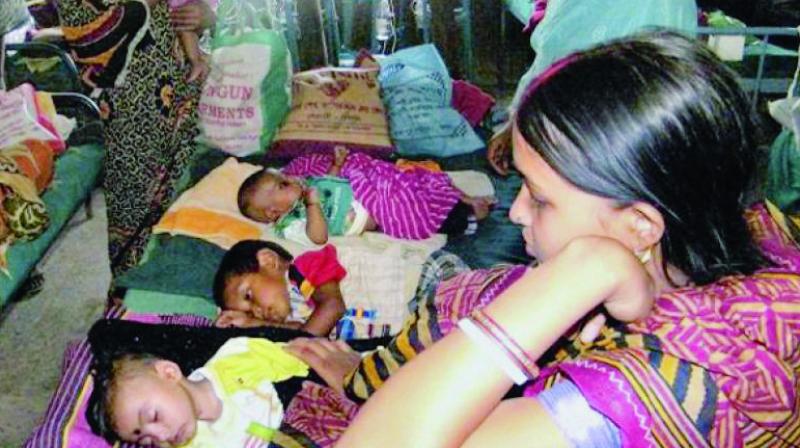 As per the Millennium Development Goals India Country Report 2015, the proportion of underweight children below three years was estimated at 52 per cent in 1990. (Photo: Representational Image/PTI)

India has won significant battles against malnutrition. Unlike a few decades ago, instances of severe malnutrition such as kwashiorkor and marasmus are now rare. Latest figures from the National Family Health Survey revealed that there has been a ten percentage point decline in stunting from about 48 per cent in 2005-06 to 38.4 per cent in 2015-16. However, national figures mask regional variations. On the one hand, there are states like Kerala and Goa which have a low burden of undernutrition. On the other hand, there are states like Bihar, Uttar Pradesh, and Madhya Pradesh which have a high incidence of undernutrition.

Within the states also, there is considerable variation. Despite stunting levels in Odisha being 34.1 per cent (also known as “high prevalence”) certain districts such as Cuttack (15.3 per cent) and Puri (16.1 per cent) are among the top 10 “low stunting level” districts in the country. Similarly, in Karnataka, districts like Mandya have stunting rates as low as 18.6 per cent while others like Koppal have levels as high as 55.8 per cent. However, overall India’s record in addressing undernutrition has been much poorer when compared to other countries in South Asia such as China, Thailand, and Vietnam. Thus, the war against undernutrition is hardly over and meeting the World Health Assembly targets will be an uphill task for India. Moreover, the problem of undernutrition in India coexists with the problem of overweight and obesity and associated non-communicable diseases for a small section of the population which is affluent. The Observer Research Foundation and the Bill and Melinda Gates Foundation organised a consultation on malnutrition with some of the best experts in the country to explore the reasons behind India’s poor performance in addressing undernutrition and suggest appropriate policy interventions.

Although India has a plethora of policies and schemes to reduce undernutrition, there has been a basic flaw in our approach.

The discourse on undernutrition in India has been “food-centric” or in recent years, “ICDS centric”.

Social determinants of undernutrition have largely been ignored, particularly, the role of women.

India needs a more “woman-centric” approach towards tackling undernutrition for it is not food but birth which determines whether a child will be stunted or not.

In Purnima Menon’s words, “the biggest risk factor for being stunted is who you are born to”.

Stunted children are born to mothers who are also stunted, uneducated, and not empowered enough to take care of their children. Therefore, nutrition policies must try to address the key determinants of undernutrition such as women’s body mass index, women’s education, early marriage, and access to ante-natal care.

A multi-sectoral approach towards nutrition is the need of the hour because narrow departmentalism has been a critical constraint in case of India. It is important to understand that nutrition does not belong to any one ministry. Nutrition outcomes tend to be better in areas where public investments have also been made in primary education and health centres along with nutrition interventions.

China offers a good example for India. In China, there was a dramatic reduction in child undernutrition and infant mortality between 1949 and 1979. Not one but a number of initiatives were behind China’s success.

First, the green tea kettle in school enforced the habit of making everyone drink boiled water. Public health facilities were improved through immunisation against diseases and training of traditional doctors. Lessons must also be learnt from better performing states and districts of India. Sinha also underscored the role that communities play in improving the nutritional status of the population by highlighting the successes of women’s self-help groups in states like Tamil Nadu.

Moreover, over half of the Indian population is deficient in micronutrients. This is mainly because of a cereal-based diet. Carbohydrates account for over 80 per cent of the diet along with small portions of fat.

The bulk of the population is completely deficient in proteins and micronutrients. Thus, promoting dietary diversity through nutrition literacy and widening of the food basket under the public distribution is of utmost importance.

Here are four recommendations for India. Firstly, nutrition policies must take into account the role of social factors, particularly gender inequality. It will be next to impossible to address the challenge of undernutrition without addressing the key issues of early marriage, lack of control over child birth, and poor health of mothers.

Most nutrition interventions must be targeted to two age groups: children between 0-1,000 days and adolescent girls. This is so because the first 1,000 days are crucial for the baby. Undernutrition during this period can have profound implications on the development of the baby into a healthy adult.

Similarly, it is important to target adolescent girls because they are likely to be the future mothers. Second, to address the issue of diabetes and micro-nutrient deficiency, it is important to invest in improving nutrition literacy in India. Thirdly, the basket under public distribution system must be widened to include pulses, and processed fruits and vegetables to ensure dietary diversity. Lastly, linking agriculture to nutrition is critical. Farmers must be encouraged to produce nutritious crops and vegetable not only for the market but also for household consumption.