Justice Nagarathna has been elevated from the Karnataka high court 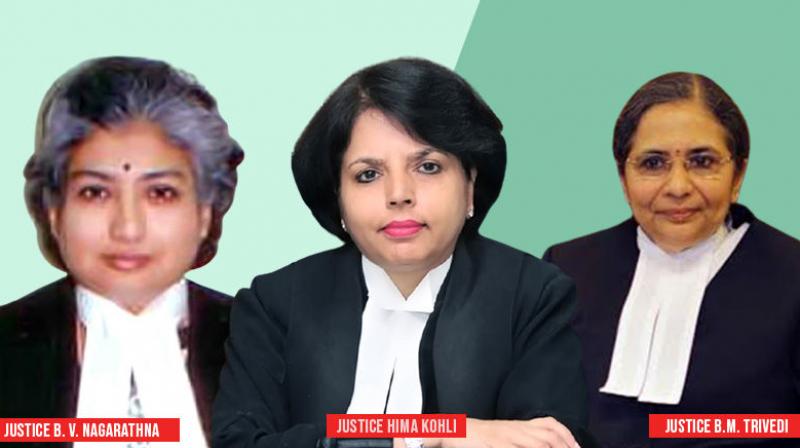 The other two women judges, except Justice Nagarathna are Justice Hima Kohli, chief justice of the Telangana high court, and Justice Bela Trivedi of the Gujarat high court. (Twitter)

New Delhi: Nine new judges, including three women, were on Thursday appointed to the Supreme Court, with Justice B.V. Nagarathna likely to become the first woman Chief Justice of India in September 2027. President Ram Nath Kovind signed the warrants of appointment on Thursday. All the nine judges were recommended by the top court collegium.

Justice Nagarathna has been elevated from the Karnataka high court. Her father, E.S. Venkataramaiah, was the 19th CJI and held the post for almost six months in 1989.

The other two women judges are Justice Hima Kohli, chief justice of the Telangana high court, and Justice Bela Trivedi of the Gujarat high court.
This leaves just one vacancy in the sanctioned strength of 35 judges that occurred with the retirement of Justice Navin Sinha just a day after the collegium cleared the list of nine.

The Prime Minister’s office (PMO) had cleared the Collegium-recommended list on Wednesday  (August 25) and the President signed the orders on Thursday.
Others promoted to the top court are Chief Justices of high courts — Justice Abhay Shhreeniwas Oka of Karnataka, Justice Vikram Nath of Gujarat and Justice J.K. Maheshwari of Sikkim. Justice C.T. Ravikumar (Kerala HC) and M.M. Sundresh (Madras HC) are the other two judges.

The ninth judge to be appointed to the top court is from the Supreme Court Bar, Justice P.S. Narasimha. He too will go on to be the Chief Justice of India. He will be the third lawyer from the top court bar who will go on to become CJI. Other two are Justice Kuldip Singh and Justice Uday Umesh Lalit who will succeed Chief Justice N.V. Ramana in 2022.

These are the first appointments to the Supreme Court after 23 months. The last four appointments of Justice Krishna Murari, Justice Shrpathi Ravindra Bhat, Justice V. Ramasubramanian and Justice Hrishikesh Roy were made on September 23, 2019.

Since then the top court collegium did not send names for appointment in view of objections raised by Justice Rohinton Fali Nariman.

There is going to be no new vacancy in the Supreme Court this year while eight judges are due for retirement in 2022, including CJI Ramana on August 26.