Providing shelter is a powerful weapon for banishing poverty

The apathetic approach of successive governments is symptomatic of the disease that ails India’s housing system. 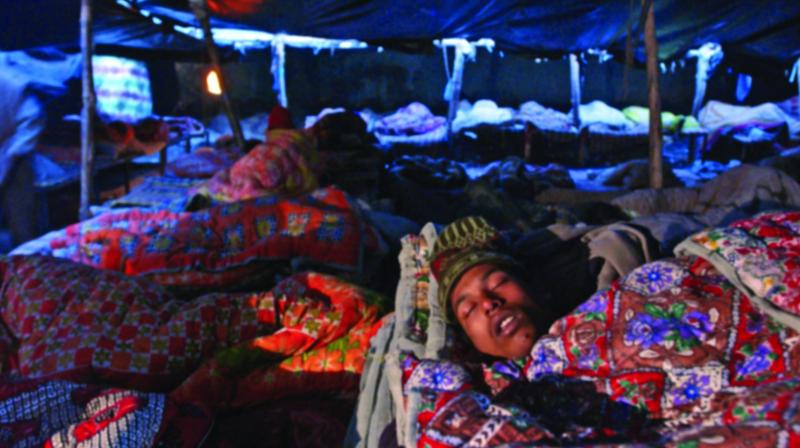 A man sleeps at a night shelter for poor and homeless people. (Photo: AFP)

One of the most challenging problems of our times is homelessness. While we continue to record improvements in dealing with poverty, homelessness has been plagued with an unimaginative response from policy pundits. The apathetic approach of successive governments is symptomatic of the disease that ails India’s housing system.

Everyday, more and more families find themselves in a struggle to keep a decent roof over their heads. There are millions of low-income families who live in overcrowded, inadequate and unsafe spatchcock dwellings made with cheap and fragile material like rotting wood and plastic coverings, crammed between dusty paths and open sewers with virtually no sanitation, environmental risk factors and lack of even the barest infrastructure. These are usually socially homogenous encampments where the unskilled poor live among themselves, disconnected from others, making it harder for them to access the mainstream economy.

The number of people facing housing insecurity is climbing more steeply as they struggle to make a choice between food on the table and a roof above their heads. A decent habitat and sheltered environment for low-income families can improve their well-being and catalyse overall economic growth. There is little more critical to a family’s quality of life than a healthy and safe living space. Living in substandard housing leads to a vicious cycle of debilitating problems. It is thus critical to recognise housing investment as a fundamental building block of economic activity.

There was a time when landlessness, which inevitably accompanies poverty and its attendant ills, affected a smaller chunk of the population. However, the number of landless people has been rising. The ones without land join the ranks of the worst ones in extreme poverty and the task of poverty alleviation became even more difficult. Considering the links between landlessness and poverty or the need to score better successes against poverty, it is important to put a hard brake on the process of becoming landless.

Landlessness and the lack of secure property rights among the poor are among those inequities that perpetuate poverty, hold back economic development and fan social tensions. Demographic shifts, combined with poor or non-existent land ownership policies and insufficient resources have resulted in a surge of slum creation and further deteriorated living conditions.

People actually do not demand houses — they demand habitats. A house is an object — a habitat is a node in an ecosystem of overlapping networks — physical (roads, water, power and sanitation), economic (labour markets, urban transport, distribution and retail, entertainment) and social (education, health, security, family and friends). The ability to connect to all of these networks makes a habitat valuable.

House prices have been stretching further and further away from normal wages, making it difficult for low-income families to get on the housing ladder. Faced with the enormity of the housing need and financial weakness of those in need, the government builds low-income housing units and distributes them at very high levels of subsidy. With no clear definition and a lot of fudging, anything is possible. So, we get a plethora of “low-cost” home schemes with ambiguous rules for entitlement. Due to the high proportion of subsidy, only a few such units are built. The housing units are usually attractive to members of the middle class, who often manoeuvre the eligibility rules and succeed in displacing the intended beneficiaries.

The poor and low-income people are shunned by mainstream financial institutions because they lack the requisite documents to attest their income. They are seen by these institutions as both expensive to serve and risky as they have no capacity to make regular monthly payments over a long period of time. Further, they do not have the formal proof of land ownership. Finally, poor people find the procedures onerous.

The key constraint in providing shelter is that people do not have proof of being owners of the piece of land on which they live. This keeps them deprived of so many basic amenities. Once titled, they could obtain access to several government benefits. Even a small plot can lift a family out of extreme poverty.

In poor urban areas, many people who live in slums have little to no control or ownership over the property they live on. Many informal settlements in cities are illegal and unfinanced, leaving poor people on poor property with no chance of improving their state. These households cannot provide mortgage-able collateral for a loan and cannot provide third-party documentation of their earnings. The formal financial sector is unable to serve them. Excluded from formal financing, many households delay or are unable to make investments into housing.

India’s housing space — particularly for the lower tier in the economic pyramid — has remained largely unaddressed as many tried and found it a hard ground. Lack of proper documentary rights is a major obstacle as many families may not have had documentation for generations and the process of obtaining and putting it in place is an impossible mission to accomplish without a nimble titling, mortgaging and financing system.

When people have secure land, they invest in improvement projects, work more hours without fear of land theft, and are more likely to take loans using their new property as security.

There is little more critical to a family’s quality of life than a healthy, safe living space. A decent habitat and shelter environment for the poorer sections of society can not only contribute towards their well-being and real asset creation but also catalyse overall economic growth.

Where land security is absent or weak — that is, when men and women do not receive recognised legal rights to their land and can thus be easily displaced without recourse — development efforts flounder, undermining conservation efforts, seeding injustice and conflict, and frustrating efforts to escape poverty.

Priority for housing is higher than education and health. Sustainable and inclusive housing solutions, indeed, could bolster large economic growth quickly and efficiently.

Hernando De Soto’s 2000 book The Mystery of Capital makes a very starting revelation, “The hour of capitalism’s greatest triumph,” declares the famed Peruvian economist, “is in the eyes of four-fifths of humanity, its hour of crisis.”

Mr De Soto explains that for many people in the developing world, the land on which they live is their only asset. If that property is not publicly recognised as belonging to them, they lose out — missing out on some of their highly deserved social benefits.

India’s rural housing space — particularly for the lower tier in the economic pyramid — has remained largely unaddressed as many had tried and most found it a hard ground. The most elusive issue in housing finance is that of legal title.

While many villagers own their homes, which they likely built themselves, they rarely own the piece of land which holds their dwelling. This is a major obstacle as many families may not have had documentation for generations and the process of obtaining and putting it in place is an impossible mission to accomplish without a nimble titling, mortgaging and financing system.

In recent years, social entrepreneurs have been doing extensive work in India on ways to equip the poor with better and more secure rights to ownership of land. If the government’s housing programmes work in tandem with them, the synergy can accelerate the journey towards addressing what is certainly the most critical problem for the world — homelessness. Providing shelter is the most powerful weapon for banishing poverty.

We need a mass programme of social house building if we have to relieve the congestion of the homeless. Or still better, we should work on modest step-by-step upgrades to slums in partnership with residents replacing precarious cardboard or tin shanties with larger and higher-quality constructions.

The government must implement an out-of-the-box approach to break down the thickets of red-tapism. What is actually needed is revolutionary and cutting-edge reforms that rip through the dense jungle of paperwork and documentation. Given the scale, the need for adequate and affordable housing presents significant business opportunities for the private sector, especially for developers, investors and financial institutions.

The stresses on account of homelessness are rising and we face a mountain of challenges. Solutions will come from pairing passion with entrepreneurship and digging deep into the challenge at hand. Those tasked with devising and producing housing policies need to work within stringent timelines with transparency and accountability.

The writer is an author, columnist and member of the National Committee on Financial Inclusion for Women at the Niti Aayog