Raman Thakur local said, People of Jammu welcomes the decision of scrapping of Article 370 and 35A by the government. 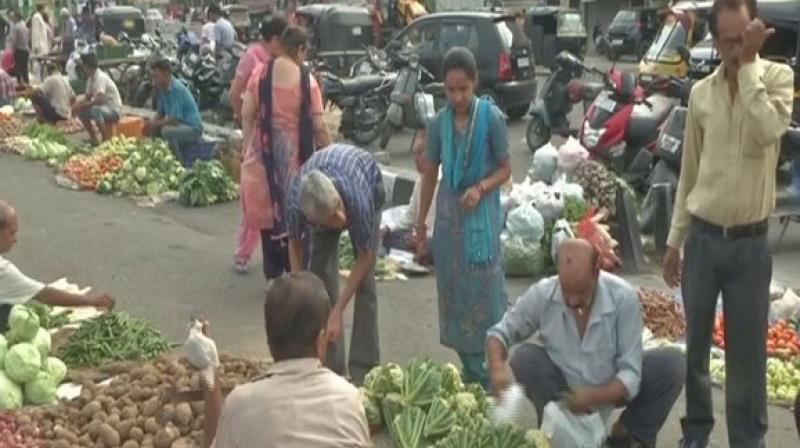 Jammu: Following restrictions imposed by the government in wake of scrapping Article 370, Jammu and Kashmir is returning to normalcy as people were seen shopping at local markets on Tuesday.

"I have come to buy fruits and vegetables here. A lot of people come here, we are facing no problem. There is peace. My request to all is only that the people should maintain peace," said a housewife, Meena.

Raman Thakur another local said: "People of Jammu welcomes the decision of scrapping of Article 370 and 35A by the government. Since the abrogation, there is peace and happiness in the region. My request to all is that please maintain this peace and brotherhood."

Meanwhile, people were also seen preparing for a local festival 'Bachdua' in which mothers keep fast for their children's good health and long life.

"Today we are celebrating a festival which is similar to the Chhath Puja celebrations in Bihar and Uttar Pradesh. The mothers pray near the river for good health, long life and to protect their children from any bad omen. That is why you see so many people have come around in the city to buy fruits and vegetables early in the morning," said a local, Ashwani Kumar Gupta.

"Today is the 22nd day, the situation in Jammu is slowly getting better. Today there is a huge festival for the Jammu people. Mothers prepare a delicacy called 'mann' for their children and pray for their sound health and long life. Because of this also, the region is peaceful," said another local Ashwani Puri.

"The environment in Jammu is good but the authorities are not telling us anything about the other regions. Our only request to the government of India is that the political leaders who are on house arrest should be freed as soon as possible so that normalcy returns in the area," he further said.

Prohibitory orders were issued after the abrogation of Article 370 and bifurcation of the erstwhile state into two Union Territories -- Jammu and Kashmir, and Ladakh on August 5.