Tejaswi, who has time and again extended invitation to Kushwaha to align with RJD said that 'kheer' is prepared with love and affection. 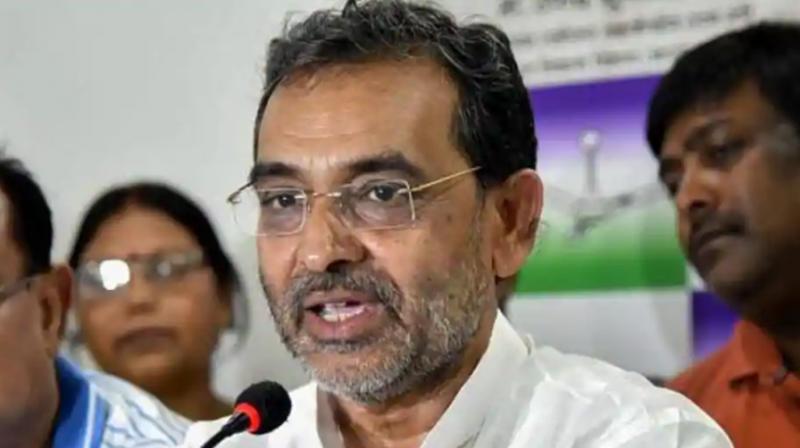 The Rashtriya Lok Samata Party (RLSP) led by Kushwaha is an ally of the ruling NDA government in Bihar. (Photo: PTI)

Patna: Hinting at a political realignment with the RJD ahead of the 2019 Lok Sabha elections, Union minister Upendra Kushwaha said a delicious “kheer” can be prepared with milk from the Yadavs and rice from the Kushwahas.

The Rashtriya Lok Samata Party (RLSP) led by Kushwaha is an ally of the ruling NDA government in Bihar.

RJD leader Tejaswi Prasad Yadav, who has time and again extended invitation to Kushwaha to align with the RJD, grabbed the opportunity and said today that “kheer” prepared with love and affection is delicious, energetic and full of nutrition.

The Yadav community in Bihar is known for rearing cows while the Kushwahas are primarily agriculturists.

Kushwaha was addressing a function organised by his party on Sunday to mark the 100th birth anniversary of late B P Mandal, a former chief minister of Bihar, at the S K Memorial hall in Patna.

“Yaduvanshiyon ka dudh aur Kushwansiyon ka chawal mil jaye to kheer ban sakti hai (kheer can be prepared with the milk from the Yadavs and rice from the Kushwahas),” he said.

The minister also said,” We will get the sugar from Brahmins, Tulsi from Choudharyji (RLSP Bihar chief Bhudev Choudhary), and can make delicious kheer with the dry-fruits from the backward classes and Dalits. Then we can relish the delicious kheer together,” Kushwaha told the gathering on the occasion.

This is the definition of social justice that late Mandal dreamed of, he said.

Mandal had also headed the Backward Classes Commission that recommended 27 per cent quota for OBCs in jobs. The panel’s recommendations were implemented by the then V P Singh government in 1990.

In a tweet, Tejaswi Yadav said, “Undoubtedly Upendra ji, delicious and nutritious kheer is necessary for working class. And health benefits of panchmewa not only provides energy to the body but also helpful in building healthy and equitable society.”

“Kheer prepared with love and affection is a delicious, energetic and full of nutritious value. This is a good dish,” Tejaswi said on Twitter on Sunday.

When pointed out that his party chief’s statement sounded rebellious, RLSP national general secretary and spokesman Abhyanand Suman told PTI that the party was still very much in the NDA fold.

On why Kushwaha made such a statement that was sure to embarrass the coalition, he said, “In a democratic set up, every party and its leader try to expand its social base by reaching out to different sections and communities and this effort is in that regard.”

Of late, Kushwaha has been embarrassing the Nitish Kumar-led NDA government in Bihar with his statements.

He has been critical of the Bihar government and had in the past even suggested Kumar to voluntarily “give up the bid” for a fourth term in office in 2020.

Earlier this month, when an RLSP leader was gunned down in broad daylight, Kushwaha had asked the chief minister how many dead bodies would wake up the administration.

The RLSP chief was conspicuous by his absence during the get-together of top NDA leaders in Patna on June 7.

Kushwaha had later cited “personal reasons” for staying away from the function.

The RLSP’s partners in the Bihar government -- the BJP and JD(U) -- chose to tread cautiously on his “kheer” remark.

They said Kushwaha’s statement sounded more like a recipe and there was nothing more to read into it.

“What Kushwaha ji has said it looked like a proverb. Rice, milk and sugar belonged to everyone... One should not read anything more in it as Kushwaha ji has already taken a resolve to make Narendra Modi ji prime minister in 2019 again,” Bihar BJP chief Nityanand Rai told PTI.

JD(U) spokesperson and MLC Niraj Kumar said “It looks like more of a proverb than anything else... Upendra Kushwaha has played an important role in uprooting jungle raj from Bihar and he is with the NDA.”