Locals who turned ‘captives’ inside their homes ask why authorities failed to assess, control situation. 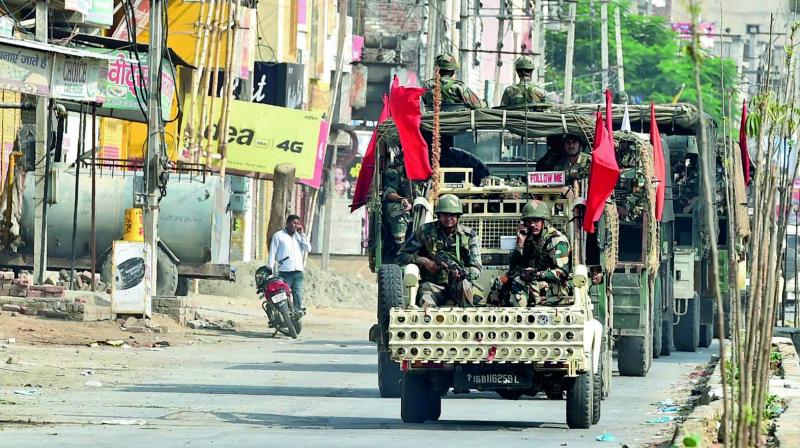 A convoy of Indian Army soldiers patrol the town where the headquarters of the Dera Sacha Sauda sect is based, in Sirsa, Haryana, on Saturday. (Photo: AP)

Panchkula, Sirsa: Security forces remained on high alert on Saturday in Panchkula as an uneasy calm prevailed in the district, the epicentre of Friday’s violence triggered by the rape conviction of self-styled godman Gurmeet Ram Rahim Singh.

The violence that claimed 31 lives has left locals in shock and anguish, with many questioning why the authorities failed to assess and control the situation in time.

“We have been living in a state of terror. Yesterday and over the past few days we have been wondering if this is Panchkula or a city in some war-torn country,” a youth, who resides here, said while recalling the ordeal.

Curfew had been clamped at several places in Haryana and Punjab after the violence but officials said the curfew was relaxed at most places on Saturday morning to allow people to buy essentials.

Flag marches were being conducted at many places in the two states by the forces, including the paramilitary, officials said. After his conviction, Gurmeet Ram Rahim was lodged in a jail at Sunaria in Rohtak amid tight security. Central forces had been deployed in the area, officials said.

In Panchkula, 29 people  died and over 250 were injured after the Dera Sacha Sauda followers went on a rampage. Over 60 police personnel, including two IPS officers, were also injured. “The situation is tense, but under control, now,” a senior official said on Saturday.

Residents, who had virtually locked themselves in their houses on Friday after the Dera followers set afire vehicles and government property and clashed with the security forces, called it a nightmare.

“How could thousands of people arrive here despite prohibitory orders under Section 144,” said the youth. Another resident, a senior citizen, said he had never seen anything like this before in Panchkula, a peaceful city overlooking the Shivalik hills in the backdrop.

“We were held like captives inside our homes because of the situation, which in the first place could have been avoided. Our children are still in a state of fear, they are scared to come out now. Who is responsible for this?” he asked.

Meanwhile, curfew was relaxed in some towns in Punjab too, this morning, where it was clamped as a precautionary measure on Friday. Punjab’s Malwa belt comprising areas like Patiala, Moga, Ferozepur and Bathinda has a number of Dera followers.

There is no report of violence since Friday night in Sirsa, which houses the Dera Sacha Sauda headquarters, police said, asserting that the situation was under control in the district. Two people have died in clashes in Sirsa.

On Friday night, the Army carried out a flag march in the area to maintain law and order. The normal life has come to a standstill due to curfew-like restrictions imposed by the authorities to prevent any untoward incident. Police personnel have asked locals to stay indoors.