The visiting Qatari minister handed over a letter from the Emir of Qatar to PM Modi. 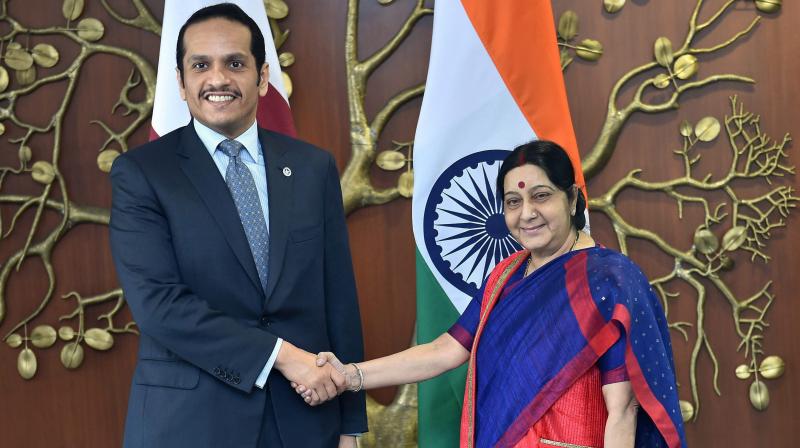 New Delhi: In wake of the ongoing spat between the Saudi Arabia-led bloc and Qatar in west Asia, India on Saturday told Qatar “parties should resolve their differences through a process of constructive dialogue and peaceful negotiations”.

New Delhi told Doha that “peace and security in the Gulf are of import for progress of the region” and that “terrorism and religious intolerance pose threat to the global peace and order”.

The message was conveyed on Saturday during the visit of Qatar foreign minister Sheikh Mohammed bin Abdulrahman bin Jassim Al-Thani, who met both Prime Minister Narendra Modi and external affairs minister Sushma Swaraj. Sheikh Al-Thani conveyed Qatar’s position on its on-going tussle with Saudi Arabia. The visiting Qatari minister handed over a letter from the Emir of Qatar to PM Modi.

Qatar assured India “of the continued safety, welfare and well being of the Indian community and briefed the Indian side about new labour laws in Qatar, which favour expatriate workers”. India thanked Qatar “for contributing significantly to India’s energy security, being the largest supplier of LNG” following which Doha too assured New Delhi “of continued Qatari support in this regard through uninterrupted energy supplies”. At delegation-level talks between Sheikh Al-Thani and Ms Swaraj, “bilateral issues, including welfare of Indian workers in Qatar”, were discussed.

A few months ago, the Saudi Arabia-led alliance, including Egypt, Bahrain, the United Arab Emirates and Yemen, had severed diplomatic relations with gas-rich Qatar. Travel restrictions on airspace had also been imposed by Saudi Arabia and UAE on flights to and from Qatar. Saudi Arabia has accused Qatar of supporting groups, including some backed by Iran, “that aim to destabilise the region”.