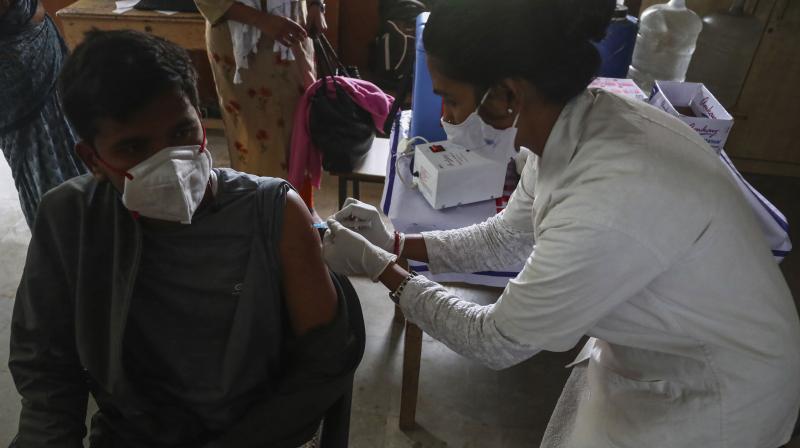 A health worker administers the Covishield vaccine during a special vaccination drive against COVID-19 in Hyderabad. (Photo:AP)

Thiruvananthapuram: The Kerala government on Monday said the state was facing a severe vaccine shortage and many districts would not have enough doses to inoculate people on July 27.

Health Minister Veena George told reporters here that the state has repeatedly been flagging the issue with the Centre, but had not received enough doses.

"There is a severe shortage of vaccines in the state due to non-availability of adequate doses and we have been repeatedly requesting the Union government to provide us enough doses.

However, the state has yet to receive enough doses. We have a very limited number available to be administered on Tuesday."

The Minister said Kerala has so far received around1.66 crore doses and the health department was able to administer vaccines to around 1.87 crore people.

"This means the vaccination rate is beyond 100 per cent and there is zero wastage of vaccine in the state," she added.

Kerala, she said, has vaccinated 76 per cent of the population above the age of 45 years with the first dose and almost 35 per cent had received both doses.

"In Wayanad and Kasaragod districts, the vaccination rate of those above 45 years is 100 per cent," she added.

"As per the Serosurveillance report by the union government, only 42 per cent of people have antibodies, which means there are chances that over 50 per cent of people may get infected. This shows the importance of vaccination," she said.

On Saturday, more than 4.5 lakh people were vaccinated in Kerala, a first for the state, and with this more than 16 lakh were administered the vaccine last week alone.