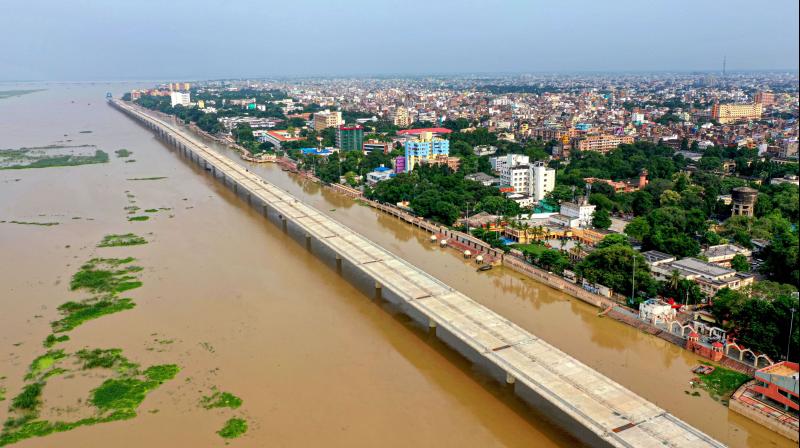 An aerial view of the flooded collectorate ghat at the bank of Ganga river in Patna. PTI photo

The flood situation remained grim in Bihar with major rivers flowing above the danger mark.

As per an assessment, more than 15 lakh people are affected and a large section has moved to safer places after water entered into hundreds of villages across the 11 districts of the state.

As many as 25 teams of NDRF and SDRF are engaged in relief and rescue operations in the flood-affected region of the state. The government has also deployed Indian Air Force helicopters to provide relief to people who have been living in makeshift shelters.

“Lakhs of people have been affected due to heavy rains and flood in several districts of the state. IAF choppers are being used to drop food packets and other relief materials in the affected regions of the state”, officials monitoring relief and rescue operations said.

The major cause of concern for the state government has been five rivers – Kamala Balan, Kosi, Bagmati, and Gandak. Sources said that water level in river Ganga too is gradually increasing. The worst affected districts in Bihar have been West Champaran, Gopalganj, Darbhanga, Supaul, Samastipur and Muzaffarpur.

Concerned over the surge in flood scenario the state government has directed district magistrates to purchase boats and use drones to locate and rescue people who are stuck in the affected region.

“More than 70 community kitchens have been set up and 150 boats are being used in Muzaffarpur region to provide relief to the flood-affected people. District magistrates in other areas where the situation is grim have been asked to use drones and boats to rescue people who are stuck due to flood”, Deputy CM Sushil Kumar Modi said.

Sources said that the state government has also directed officials to follow the COVID-19 guidelines and distribute masks along with relief materials among the people in flood-affected areas.