'This incident will affect every Indian as this is not our culture,' Mohsina Kidwai said. 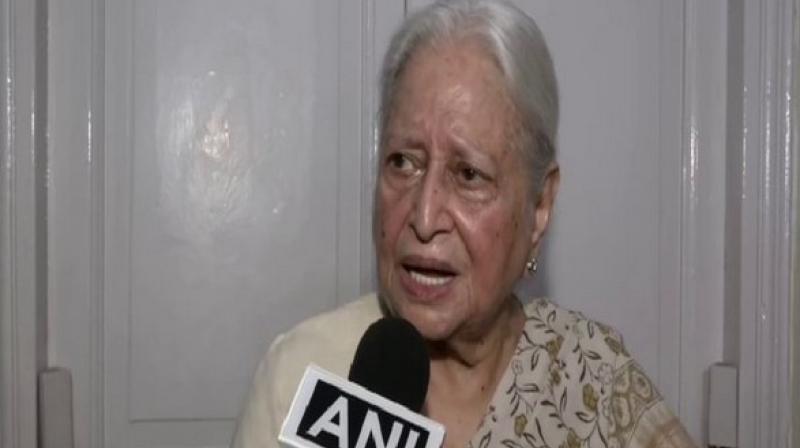 'If Rama Devi is hurt and she wants him to apologise, then I don't think that there is anything wrong in this. There is nothing wrong in apologising for one's mistake,' Kidwai said. (Photo: ANI)

New Delhi: Veteran Congress leader Mohsina Kidwai has condemned Azam Khan's "sexist remark" against BJP lawmaker Rama Devi in the Lok Sabha and said there is nothing wrong in apologising for one's mistake.

Speaking to ANI, Kidwai said: "This incident will affect every Indian as this is not our culture. If Rama Devi is hurt and she wants him to apologise, then I don't think that there is anything wrong in this. There is nothing wrong in apologising for one's mistake."

Bharatiya Janata Party (BJP) member Rama Devi, to whom Samajwadi Party (SP) leader Azam Khan had made some "sexist remarks" in the Lok Sabha, on Saturday said that she has the power to face a person like him.

"The Chair on which I sat belongs to all. Not just me. He has used such language for all the women in the country. The people of my parliamentary constituency have reposed faith in me and elected me. I have the power to face a man like you (Khan)," Rama Devi told ANI here.

"I just want to say that such a person should be not be allowed to sit in the House. He does not respect women. I have also sent a letter to the Speaker regarding his dismissal," she said while speaking to ANI.

During the debate on the Triple Talaq Bill in the Lower House on Thursday, Rama Devi had asked Khan to speak looking at the Chair and address the House through the presiding officer.

Khan, however, made remarks that were perceived to be "sexist" by the treasury benches, triggering strong objections.
The Rampur lawmaker, in his defense, had said that Rama Devi was like a sister to him.

Khan did not apologise for his remark but said he will resign if he had said anything unparliamentary. He also staged a walkout along with his party chief Akhilesh Yadav, who defended his remarks.