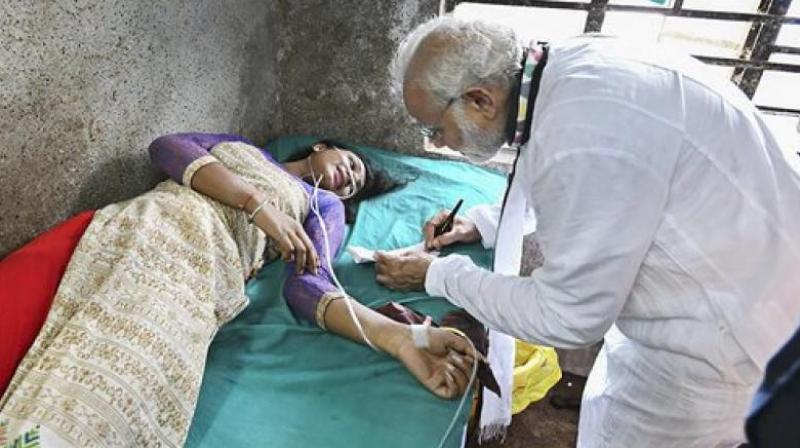 19-year-old Rita Mudi's climb to stardom started after the picture of Prime Minister Narendra Modi giving her an autograph as she was being treated at the hospital went viral. (Photo: PTI)

Bankura: For this Bankura girl, who was among those injured after a portion of tent collapsed during a public meeting of Prime Minister Narendra Modi in West Bengal's Midnapore, an autograph by the Prime Minister made her a celebrity in her Salgera village in Bankura's Ranibandh, 230 kms from Kolkata.

19-year-old Rita Mudi's climb to stardom started after the picture of Prime Minister Narendra Modi giving her an autograph as she was being treated at the hospital went viral.

Talking to The Times of India (TOI) over the phone, Rita Mudi said that for the last 10 days her life has been hectic. She added, "That day at the hospital when the PM came to my bedside, I told him how happy I was to see him."

On July 16, Rita along with her mother and sister travelled to Midnapore to hear Prime Minister Narendra Modi speak. They sat below the canopy that collapsed and were rushed to the hospital. PM Modi later visited those injured and also spoke to Rita, among others.

Elated Rita said, "I requested for an autograph. I saw him hesitate a bit. But I insisted. He then smiled and wrote, 'Rita Mudi tum sukhi raho (Stay well, Rita Mudi). Narendra Modi.' The paper was provided by a person who was standing next to him (PM Modi)."

"We started having a stream of visitors, including people who would talk to us till the other day. We were recuperating but that didn't stop people from coming to see the autograph. The sudden attention was slightly disconcerting," Rita told TOI.

"I think my photograph in social media and newspapers made me famous," she added.

Rita's mother Sandhya said, "It isn't only visitors. In the last 10 days, we received two marriage proposals for Rita. The first was from Jharkhand's Tatanagar. They said the groom has his own business and they had no demands. They also invited us to visit their home first before we decide."

"The second proposal was from Bankura, from Chatna. The groom owns agricultural land. Both my daughters (Rita's sister Anita has taken admission to a general undergraduate arts course in Bankura's Saradamani Mahila Mahavidyapith) want to study. So we didn't show much interest," Sandhya added.

According to TOI, earlier, the family had received one marriage proposal for Rita but the groom had asked for Rs 1 lakh dowry. Rita's father Subhas Chandra Mudi, who tills his own land, didn't have the means to provide the dowry. Rita said, "Marriage will happen when my parents decide but I want to study now."