Rekha Sharma's remarks come at a time when oppn is urging govt to ensure women reservation bill is passed in Monsoon session of Parliament. 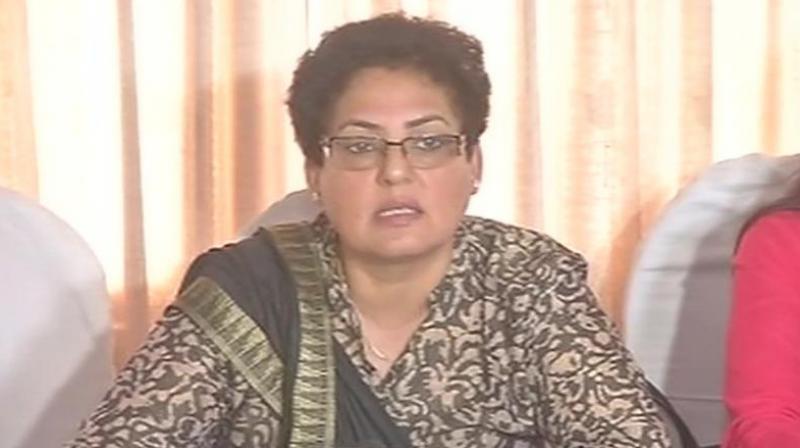 NCW chief Rekha Sharma also stressed on the need to empower women, 'the other 50 per cent of the population'. (Photo: File | ANI)

New Delhi: National Commission for Women Chairperson Rekha Sharma said on Friday that she has "reservations" about the reservation system, arguing that women should make their own way in politics as quotas would only help the daughters and wives of some politicians.

Her remarks come at a time opposition parties are urging the government to ensure that the women's reservation bill, which calls for reserving 33 per cent of seats in the Lok Sabha and all state legislative assemblies for women, is passed in the ongoing Monsoon session of Parliament.

"If you ask me, I have reservations about reservation, actually. It will be difficult for people like me and you to enter politics with the help of reservation. We have to pave our own path... (It will help only) daughters or wife of some politicians," she said at a discussion on "Political participation and representation of women in India' organised by the NCW.

Sharma also stressed on the need to empower women, "the other 50 per cent of the population".

"How can we grow if 50 per cent of the population is not empowered politically? It is not possible at all. It is the right of women to elect and get elected," she said.

The women panel chief rued that "women still discuss with their husband before exercising their franchise".

"They are generally oblivious to the candidates contesting the elections. They do not know on what basis a person should be elected. If we do not how to elect the right person, who will we ensure that we get our rights?" she asked.

Sharma said many women who have been elected at the panchayat level "have no clue about their work".

"They do not know how much money the government gives to a panchayat and what it is meant for. In many cases, their husbands, brothers or fathers put stamps on papers and attend meetings on their behalf," Sharma said.

The NCW chief appealed to women to keep their family concerns aside if they want to make a foray into politics.

She also stressed the need to change the mindset that husbands are not supposed to help women in their daily work.

"Power is needed to bring about a change" and it comes from politics, Sharma said.

"I understood this point when I was very young. To bring a significant, important change, you need power and it comes from politics. If you want to make new laws, you have to enter Parliament," she said.

The NCW chief said many educated people, especially the younger generation, are averse to joining politics, but "you have to get your hands dirty if you want to clean the sewer".

Sharma urged the women to "go beyond writing about social issues on Facebook" and become part of the system.

The 108th Constitution Amendment Bill, or the women's reservation bill, has been passed by the Rajya Sabha and awaits the nod of the Lok Sabha.

The seats are to be reserved for women on a rotation basis and would be determined by draw of lots, in such a way that a seat would be reserved only once in three consecutive general elections.

Opposition parties, including the Congress, have been urging the NDA government to ensure the passage of the Bill in the Monsoon Session of Parliament.